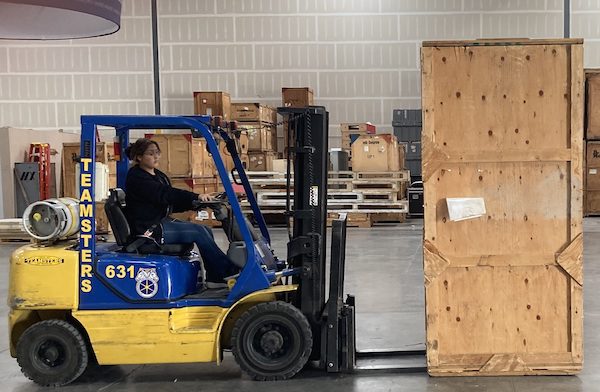 Ayriana Peck guides her forklift up to a tall, wooden crate, slips the fork under the pallet, lifts it a few inches and backs out, carefully checking for obstacles behind her, then loads the cargo onto a trailer that’s theoretically headed to a tradeshow exhibit floor.

It’s part of a two-year convention construction program that certifies Teamsters in all facets of tradeshow labor.

“We’re definitely going to be well-rounded from this program,” says Peck, a 19-year-old level-three apprentice. “You may like something better than the other, but you’re going to be a jack-of-all-trades.”

A class of 39 applicants completed a three-day “boot camp” in November, which mimics various tasks a convention worker might be expected to perform. That would entail long walks, rolling out and kicking carpet, pushing carts, lifting propane tanks, climbing ladders, unloading cargo and moving crates with a J-bar.

Candidates are evaluated by Teamsters instructors based on team effort, attitude, ability to follow directions and concern for others. Nearly all of them make it through camp, says Crystal Slaughter, Teamsters 631 apprenticeship coordinator. “The only way they don’t make it is to self-remove or show up late,” she says.

Graduates begin their first year of classes with an overview of the convention industry. Then they learn exhibit booth decorating, design and repair, installation and dismantling, OSHA regulations, and pallet jack operation.

“They teach all the safety aspects, and customer service as it pertains to that department, and all the fundamentals of how to operate, build and the expectations of that department,” Slaughter says.

The Teamsters’ 70,000-square-foot training center opened in 2018 and turns out about 200 apprentices a year, though the number was reduced during the pandemic, the apprenticeship coordinator notes.

“It’s based on need. We don’t want to bring in too many and have people out of work. You try to balance it as much as you can,” she says.

“There have been several times we haven’t been able to fill the labor requests for the employers and they have had to bring in outside sources. We have a busy year coming up and really need to ramp up workers.”

CES, the premiere electronics tradeshow that brings about 180,000 attendees to Las Vegas, is coming in January, kicking off a big year of meetings and conventions across the country.

Peck, the forklift trainee, is a third-generation Teamster, following the career paths of her father, grandfather, and aunt. She’s always been interested in joining the union.

“It’s a brotherhood and a sisterhood,” she states. “Who wouldn’t want to be part of that?”

Starting pay for a bottom-level apprentice is $21.60 an hour, increasing after every 500 hours of work to $32.40 at the fourth level. Journeymen make $36 an hour. Teamsters Local 631, with some 1,500 convention workers, negotiated a four-year contract in June that marks the largest wage package in the history of the local union.