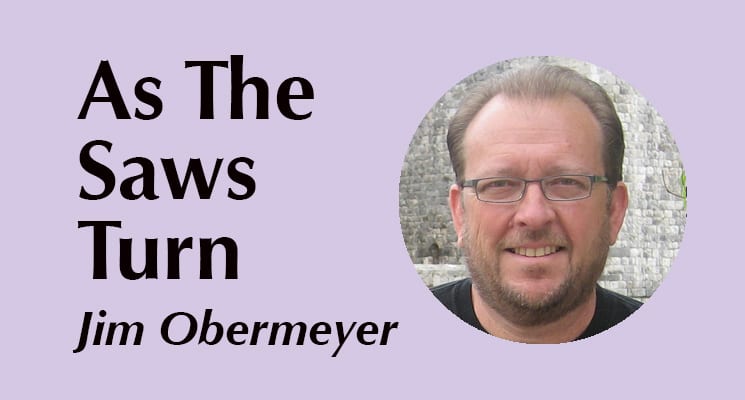 As The Saws Turn: Crossing Paths

Think back to some of the people you have met over the course of your lifetime. And think for a moment about how you met them. Was it purely a matter of circumstance that you were actually in the same place at the same time and then met that person? Or was it completely orchestrated by someone else?

We meet a lot of people over the course of our lives. Some are just passing through and disappear from the radar quickly. Some become acquaintances. Sometimes they become good friends, and sometimes a spouse. I met my wife in college. And it was a totally random circumstance, or so it would appear. A few seconds earlier or later and our paths would never have crossed…

I have been fortunate to be involved with the Randy Smith Memorial Golf Classic for the last few years. I accepted the dare of an industry friend and went to my first event, just to check it out. I am not a golfer, so I hung out with a couple of the board members during the day and learned a lot of what this event is all about. And then I attended the evening banquet. I will never forget it. And I will do my best to never miss another one.

So, a few weeks ago I am on a conference call with all of the board members and we were starting the planning for this year’s 25th anniversary event. As part of the process, we decided we needed to do a news release to our industry press to announce the event and show the new logo. I’ve done a little bit of writing, so I was elected to write it.

While creating this release, I am reading every page of The Randy website (www.rsmgc.org) to remind myself of why this event is so important to our industry. I really wanted to get my head into it. And I’m reading the story of how this thing all got started:

The first event was held at Hidden Hills Country Club in Stone Mountain, GA in August 1995. The first two years the event focused solely on providing support for the family of Randy Smith, a project manager for an Atlanta-based exhibit house. He died tragically in an automobile accident on his way home after working long hours at the Sporting Goods Super Show in January of 1995. Randy left behind a wife and two small children.

I have read this before. And if you’d have asked me, I could have told you this story. But this time I literally stopped mid-sentence: “…Sporting Goods Super Show in January of 1995.” Wait a minute. I went to the Super Show one time, and it was some time in the 1990s.

In those days it was one of the biggest shows in the country and had some of the biggest exhibits ever done. Companies like Nike and Adidas pulled out all the stops for this one. If you were a tradeshow guy, you had to go check out this show at least once.

I dug into my old files, I went to my old records of travel and of shows attended. I searched my memory bank for details. And then I found it: I was at the Sporting Goods Super Show in January of 1995. The more I thought about that, the more it really freaked me out.

Did I meet Randy on the show floor? Did we work side by side during the long hours of setup? Did our paths cross? I have no idea. But I thought about that a lot in the next few days. What if he had left the hall just a few minutes earlier? What if he had taken a different path home? Would it have changed his fate that day?

And here we are 25 years later, still remembering the fate of one man that, because of the caring hearts of so many others in our business, has launched a movement in our industry to help families who have suffered severe tragedies or face insurmountable medical expenses.

The Randy and its officially sanctioned ancillary events have assisted more than 170 industry families with financial and emotional support, raising nearly $2 million in the process.

Think about that for a moment. One man’s path crossed by more than 170 others who have benefited from the generosity of this industry. And countless others who have attended this event and have been touched by what they experience.

Now think about this: Be there this year. October 4 at Chateau Elan Golf Club in Braselton, Georgia. I dare you.

See you on the show floor…and see you at The Randy.

Jim Obermeyer has been in the tradeshow industry 37 years, both as a corporate tradeshow manager and exhibit house owner. He is currently a vice president at Hamilton Exhibits and can be reached at jobermeyer@hamilton-exhibits.com.