D.E.A.L.: Attractions: Step Back in Time in Boston Along the Freedom Trail 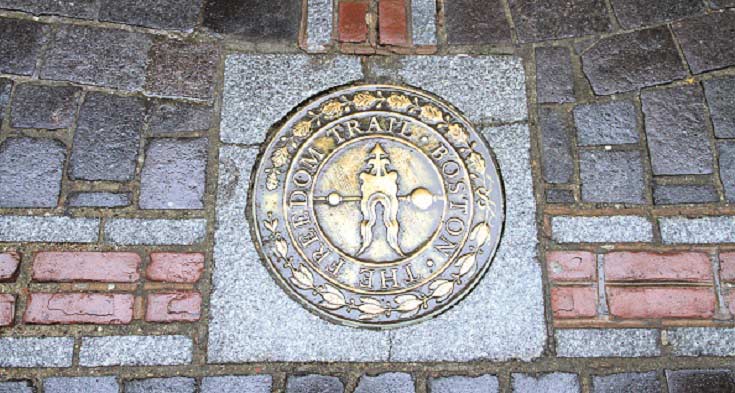 Boston just naturally brings out your intellectual curiosity—whether it’s the historic sites at your every step or the universities’ offerings—it makes you want to learn!

I recommend starting at the Boston Common, a 50-acre central public park that dates back to 1634. It is the oldest city park in the U.S. and is the southern end of Boston’s Freedom Trail, a 2.5-mile-long path through downtown Boston, that passes by 16 historical locations. Marked largely with brick, it winds from Boston Common to the Bunker Hill Monument, and includes the site of the Boston Massacre, Faneuil Hall, Paul Revere House (built about 1680, it’s the oldest house in Boston), Old North Church, several burying grounds, USS Constitution, Bunker Hill Monument and more. You can climb a spiral staircase (with 294 steps!) to the top of the 220-foot-high stone obelisk of Bunker Hill Monument. The monument sits atop Breeds Hill and is part of the Boston National Historic Park. After the long climb, at the top there are four windows with an amazing view that look over Boston, Cambridge, Charlestown, and Boston Harbor and a very small brass cannon from the battle hanging on one wall.

If you enjoy time-traveling and seeing people in period attire visit the Printing Office of Edes & Gill, a living history exhibit along Boston’s historic Freedom Trail (behind the Old North Church). Located in the Clough House, one of Boston’s oldest surviving brick residences founded in 1713, the printers are dressed in colonial attire, happy to demonstrate the mechanics of the printing press, while at the same time emphasizing the importance of free speech and the necessity of communication distribution.

You can also visit Captain Jackson’s Historic Chocolate Shop where you can learn all about the history of chocolate and how it was produced and eaten during the American colonial period. Named after the owner, you’ll learn all about the chocolate making process by one of the knowledgeable staff, dressed in period clothing, and have the opportunity to sample either a historically accurate colonial style chocolate drink or a piece of freshly made chocolate.

Another fascinating attraction, The Mapparium, was built in 1935 by Rand McNally and is made up of a three-story-tall stained glass globe which is viewed from a 30 foot long bridge through its interior. The Mapparium was designed so that the countries of the world could be viewed in accurate geographical relationship to each other, hence its design, a mirror image, concave reversal of the Earth, viewed from within. It’s an opportunity to view the world as it then was, showing the names of the countries back in the’30s, such as Siam and Italian East Africa.

After all those history lessons, you can stop off at The New England Aquarium—it’s the largest aquarium in the region with a huge 200,000 gallon tank in the center that visitors walk around via a corkscrew walkway. Opened in 1969, this aquarium’s huge multistory level tank has helpful software that is attached to glass viewing panels that enables you to identify its inhabitants. You’ll see stingray touching pools, little sharks, horseshoe crabs, starfish, penguins and more.

Finally, if all this educational stuff makes you thirsty, just across the street from the Common is Cheers at 84 Beacon St. The bar opened in 1969 and was called The Finch & Bull until the TV show’s popularity made the owners decide to change the name to match the show. And the Sam Adams Brewery, located in Jamaica Plain, offers a free tour to guests every 30 minutes, complete with tastings and info about ingredients and the brewing process. For a more in-depth tour of the barrel rooms paired with beer and cheese tastings, tickets range from $10 to $50. If tours aren’t your thing, you can also explore their taproom for experimental tastings and Thursday night trivia.