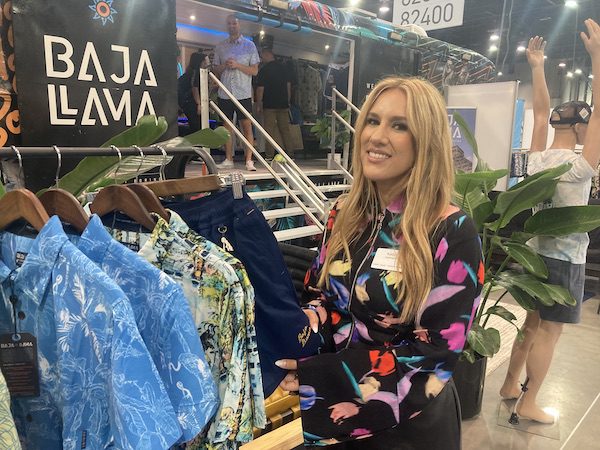 Fashion runs in Kelly Helfman’s genes. Her grandmother was a seamstress, and her mother owned a vintage clothing store.

Growing up in Los Angeles, Helfman roamed the aisles of Goodwill, Salvation Army and local thrift stores, looking for a unique style that would distinguish her as the most fashionable girl in junior high school.

Helfman’s passion for fashion propelled her from selling clothes at Nordstrom and shoes at London Sole to being named president of Informa Markets Fashion, the company behind MAGIC Las Vegas and other tradeshows that connect buyers and sellers in the apparel industry.

“It’s definitely in my blood,” Helfman says during an interview prior to the start of the high-energy MAGIC show at Las Vegas Convention Center, August 8-10.

After majoring in film at University of Arizona, Helfman returned to Los Angeles, working as a talent agency manager, but decided the movie industry wasn’t her gig. She followed her heart into fashion.

“I started my own clothing line at 23. I had retail experience; my line was in showrooms. I did my own PR.”

Running her own business was a challenge. Most of her revenue was re-invested in the company, and day-to-day operations became a grind.

A year later, she jumped at the opportunity to join MAGIC as a customer service representative. She had attended the nation’s premier apparel tradeshow with her mother over the years.

“At 24, I’d call the big executives for Levi’s and Steve Madden. I’d be their point of contact and get them set up for the show,” she says.

With her retail experience and understanding of different aspects of fashion and tradeshows, Helfman became a “little bit of a chameleon,” merging the two industries.

By age 40, Helfman had soared to the top as a fashion business executive, overseeing the entire fashion portfolio for Informa Markets, which includes 13 co-located tradeshows throughout the year.

A working wife and mother with two children, Helfman was patient about achieving success. She resorted to her film industry mentality, where you work your way up from the mail room.

She set expectations for herself and exceeded them. “My boss told me to make 20 successful calls a day, to contact and actually engage with customers. I made 25 to 30.”

She also learned to accept feedback, to not become defensive, but grow from it.

“Last but not least, I do what I love,” Helfman adds. “It doesn’t feel like work if I love fashion. I love people and I love leading people.”

Naturally, she’s encountered obstacles along the way. The fashion industry is constantly changing, so she had to keep up with those changes and learn to accept them.

“That was tough for me,” she says. “Also, earning respect. You have to be taken seriously. I had to filter myself and be mindful and strategic about what I contribute. Those were my challenges then, not now.”

Who knows what the future holds for Helfman? She’s in charge of a large company, and just getting back to post-pandemic business is her main priority. It’s important to develop new offerings, such as digital advertising direct to consumers and B2B platforms.

“For me, personally, I don’t know,” Helfman confesses. “Informa does a great job investing in the future. I want to continue with this group and see how things shake out.”

Informa plays a vital role in the fashion industry, she notes, with MAGIC addressing topical issues such as disruption of the supply chain, sustainability, waste reduction, sourcing, diversity and inclusion.

“We’re a key industry event and we drive this industry forward,” Helfman continues. “Fashion is very fluid. Priorities are different today than they were five years ago. There’s lots of moving parts. What’s relevant in women’s fast fashion is different than international luxury fashion. The B2B wholesale side … it’s not apples to apples. It’s always customer led.”

Held twice a year in Las Vegas, MAGIC drew upward of 90,000 attendees prior to the COVID shutdown. The tradeshow resumed in August 2021 and has rebounded as quickly as can be expected, particularly international participation, Helfman says.

She’s seeing a steady return of international buyers, and the third MAGIC show since the pandemic is hitting its registration goal, though Helfman was reluctant to disclose that number.

Except when it comes to shopping. She still scours estate sales, sifts through thrift stores, walks the Rose Bowl swap meet. Vintage clothing is still a big part of her life.

“I shop brands at MAGIC. Not only brand names. I like to go high-low. I might shop at Saks Fifth Avenue for a high-end designer and match it with denim jeans for under $100. I’m all over the place. One day I’m in $10 flip-flops, the next day it’s Gucci.”