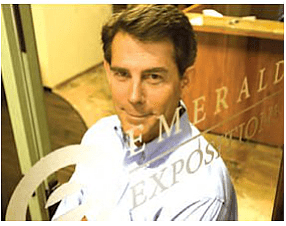 More than 100 show organizers and their guests, as well as a bevy of industry suppliers and association executives are all in Atlantic City, N.J., this weekend, October 28-30, to celebrate the fastest-growing shows in the U.S. at the 2016 Trade Show News Network Awards.

“We are thrilled to be able to celebrate the success of these amazing shows, as well as The Show Manager of the Year Awards and TSNN Industry Icon Honoree David Loechner (at right) who heads Emerald Expositions,” said TSNN President and Editor-in-Chief Rachel Wimberly.

Highlights of the three-day celebration start off with a Roaring 20’s costume party at the legendary Palm restaurant just steps from the Atlantic City Boardwalk.

After a night filled with fun surprises, attendees will head to the TSNN Awards Education Conference and in the first session, “Your Exhibitors; What You Need to Know to Keep Them” led by Randal Acker, President at EXHIBITOR Media Group and three high-level exhibitors who will discuss how show organizers and exhibitors can work better together.

Following lunch, Ron “Jaws” Jaworski, former NFL quarterback – business owner and author of “The Games That Changed the Game”, will talk about what leadership skills he things are invaluable and lessons he has learned along the way.

Saturday night is the 2016 TSNN Awards Gala Celebration at Harrah’s Waterfront Conference Center where the 50 fastest-growing shows in the U.S. will find out which ones are the overall winners in the association and for-profit categories.

Five of The Expo Group “Show Manager of the Year” awards also will be presented, as well as the TSNN Industry Icon Award and the “Best of Show” winner will be revealed.

After the gala, the celebrating will continue at the Afterglow that also has fun experiences in store.

The final day of the event ends with a brunch at the Sheraton and a special guest appearance by the newly named Miss America Savvy Shields, who will talk about her first few weeks wearing the crown.