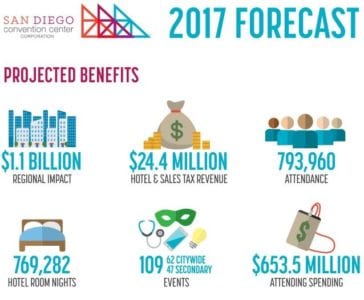 The San Diego Convention Center Corporation is forecasting a record-breaking calendar year in 2017 for medical meetings.

A total of 21 medical events, including BIO 2017, the American Academy of Orthopaedic Surgeons (AAOS) and the American Association of Diabetes, will hold their annual events in San Diego over the next 12 months: that’s the highest number of medical meetings ever in a calendar year.

The economic benefits from the medical meetings alone are estimated to account for 53 percent of the convention center’s estimated $1.1 billion in regional impact that will be generated between January and December of 2017. Here’s a fun fact: The forecasted attendance of 219,275 for 2017 medical meetings is more than the populations of the cities of Escondido and Encinitas combined. 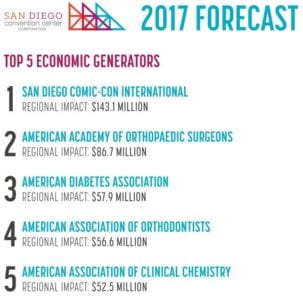 “The upcoming year will be one of our strongest ever for medical meetings,” said Clifford “Rip” Rippetoe, CFE, president and CEO of the San Diego Convention Center Corporation. “Medical meetings are key to San Diego’s success as a premiere meeting and convention destination. Our region is a hotspot for research, education and the biotech industry. In calendar year 2017, medical meetings account for 27 percent of total attendance and 53 percent of our regional impact.” This calendar year, a total of 62 citywide conventions will take place. The City of San Diego benefits from each event, because the hotel and sales tax revenue that results form these conventions goes directly to the city’s general fund. In 2017, that number will be an estimated $24.4 million. Convention attendees are projected to generate approximately $653.5 million in direct attendee spending. Currently, center events are projected to account for 769,282 hotel room nights in 2017.

As for building occupancy, the facility will set an all-time record of 70 percent occupancy. This will occur even with the Sails Pavilion being unavailable due to capital project work taking place for most of the calendar year. The industry average for occupancy is 50 percent, and at levels above 60 percent, a center is operating close to full capacity and may begin to turn away significant amounts of business.

To learn more about the 2017 Forecast, watch https://www.youtube.com/watch?v=8I9ust6CLT8&feature=youtu.be.