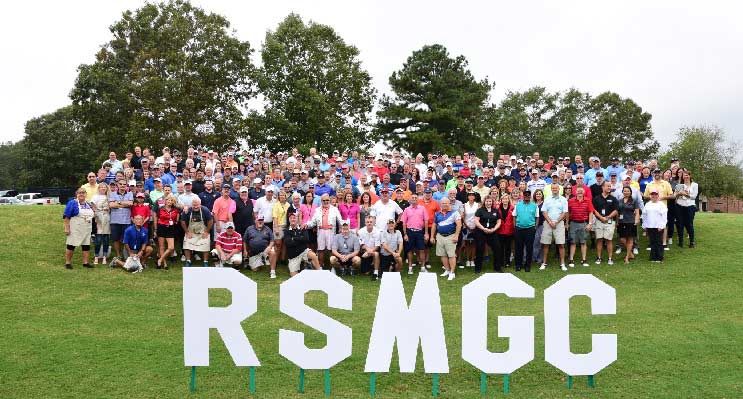 The annual event is named after Randy Smith, a project manager for an Atlanta based exhibit house, IDEAS, Inc., who died tragically in an automobile accident on his way home after working long hours at the Super Show in January 1995. Randy left behind a wife Jenny, and two small children, Austin and Justin. Two of Randy’s co workers at IDEAS, Ted Peterson and Rich Johnson, started the RSMGC in August of 1995 in hopes of helping the emotional and financial burden Randy’s death caused his family.

The first two years the event focused solely on providing support for the Smith family. In 1997 the decision was made to open up the event to other families who had suffered a similar tragedy or faced true hardship. The first additional recipient was Nicole Sheldon, daughter of long time shipping industry veteran Chris Sheldon in Wheaton, IL. Nicole was eight years old at the time and had recently undergone a heart and liver transplant. She was said to be the “sickest child ever to leave a Chicago land hospital alive.”

In their history they have accepted over 95 percent of officially received assistance requests and have provided over $1 million in assistance to more than 150 trade show families. The RSMGC blankets all segments of the exhibition industry from exhibitors to show managers to general contractors all the way down the trade show supply chain. One of the many things the  founders and the governing board are most proud of is how they’ve been able to bring everyone together for this day of fellowship and good will. Many competing companies in their respective fields have known the Randy as the day they “lay down their swords” for the good of the overall cause.

Exhibit City News magazine was very grateful when the RSMGC selected our beloved editor-in-chief, Arthur Bloberger, to receive a medical assistance grant last year when he was diagnosed with inoperable esophageal cancer that had metastasized to his stomach, lymph nodes and liver in July. It eased his mind to know that there would be funds for his family to cover his end-of-life costs. He passed away on September 28 last year.

For more info, visit www.rsmgc.org for ways to get involved, donate or see lists of their recipients. To donate items or to volunteer at the event, contact Sandra Braun at sbraun@nthdegree.com.