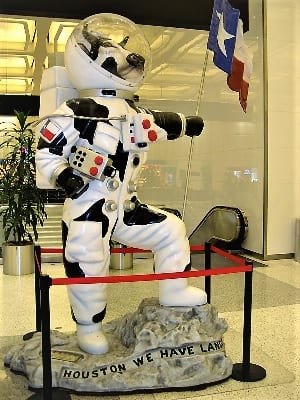 Size: The airport covers 10,000 acres and has 10 runways that, if placed end-to-end, would be 43 miles long. It has 130 gates in five terminals that are connected by a skyway and a subway. Terminal E was completed in 2004 and it’s currently undergoing a $1.3 billion capital improvement program scheduled to be completed in 2024-25.

Fun Fact #1: The airport grounds are beautiful, particularly in the spring when Houston bursts into flower. IAH groundskeepers are tasked with maintaining more than 41,000 square feet of flowers and shrubbery.

Fun Fact #2: There are several art installations on the IAH grounds and interior. “Light Spikes” (pictured right) was created for the 1990 G7 Summit, hosted by President George H.W. Bush in Houston and was moved from the GRBCC to the IAH grounds when the summit ended.