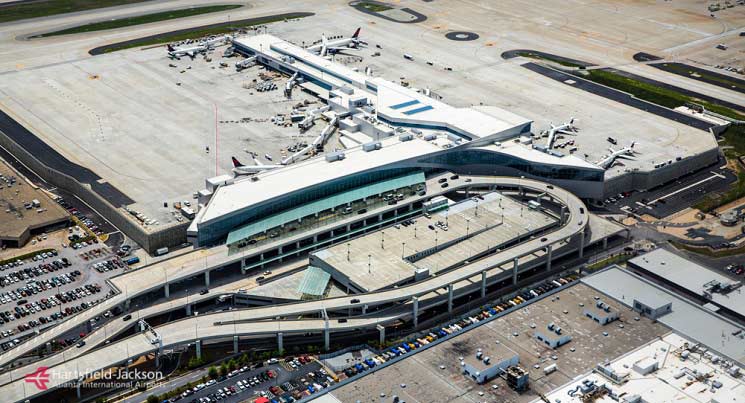 Size: The airport covers 4,700 acres with five parallel runways. It has 192 gates of which 152 are domestic and 40 international. It is the world’s busiest commercial airport and serves nearly 104 million passengers per year.

Fun Facts: It was built on a closed auto racetrack owned by former mayor and founder of the Coca-Cola company, Asa Candler. As part of the sales deal it was initially named for him. Three Atlanta mayors have been namesakes for the Airport.

In October of 1940, the U.S. government declared it a military airfield and the U.S. Army Air Forces operated Atlanta Army Airfield jointly with Candler Field. The Air Force used it primarily to service combat aircraft.

The terminals and concourses are connected by the Transportation Mall, a pedestrian tunnel with a series of moving walkways and The Plane Train, an automated people mover.

A 20-year master plan was finalized in 2016 which includes, among its many improvements, modernization of the existing terminals, A new hotel, travel plaza, mixed use commercial complex and the addition of a sixth runway.