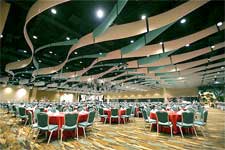 Seven hundred and twelve panels, in 21 unique shapes, are arranged overhead such that the entire ceiling looks like a stylized wavy ocean surface.

Sculptural acoustic ceiling is the largest of its kind
The Mississippi Coast Coliseum and Convention Center (MCCCC) is located a few hundred feet from the waters of the Gulf of Mexico in Biloxi, Miss. In 2005, Hurricane Katrina left the facility heavily damaged, and in 2008 FEMA provided funds for its restoration. The MCCCC’s executive director, Bill Holmes, oversaw the project.


Early in 2008, Transformit’s founder, Cynthia Thomson, MFA, showed Holmes and the architects of the MCCCC, Eley Guild Hardy, a sculptural fabric panel with significant sound-absorbing properties. The architects later proposed a ceiling treatment for the convention center with the dual purpose to enhance the appearance of the convention center’s ballrooms and to improve the quality of sound in the spaces.

The ceiling was designed and specified by Eley Guild Hardy, in consultation with Transformit, using vertically oriented panels placed high in the room, just below the air conditioning ductwork, and amid the lighting fixtures and fire sprinklers. Seven hundred and twelve panels, in 21 unique shapes, are arranged overhead such that the entire ceiling looks like a stylized wavy ocean surface.

While the suspended panels enhance the appearance of the ballrooms, they also satisfy technical and practical requirements.

The panels are suspended vertically, in order to minimize the accumulation of dust and debris, and then they are rigidly mounted to the ceiling structure. The panel’s exterior skins are capable of being removed and replaced for cleaning without removing the acoustic liner which is washable.

MCCCC’s executive director, Bill Holmes, says that the ceiling helps his facility “stand out in the minds of attendees and show promoters alike.”

Sound quality in the rooms was measured by Dave Woolworth of Oxford Acoustics before and after the ceiling installation. He says that “reverberation time in the rooms is reduced by 20 percent,” said Dave Woolworth of Oxford Acoustics. “In a meeting room full of people eating lunch or listening to a speaker, it is significantly easier to understand and be understood. This reduces the need to talk louder, and reduces fatigue as well.” 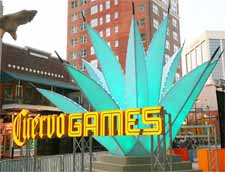 The Aztec-like pyramid base supports the weight of several people, and the entire structure, including lights, can withstand wet weather as well as high winds.

Giant agave cactus is center point of Cuervo mobile marketing tour
Jose Cuervo is promoting its brand through the Cuervo Games, a multi-city mobile marketing tour. The events of the Cuervo Games involve local teams vying for prizes by completing a series of daring and athletic tasks. Transformit produced a giant agave cactus, the plant from which tequila is made and the Cuervo logo, as the visual centerpiece of the event.

Digital Kitchen, contracted by Crispin Porter + Bogusky to design and oversee the production of the agave, first considered using an inflatable structure, but decided on a rigid structure skinned with fabric because an inflatable would not have given enough definition to the agave’s leaves. Digital Kitchen asked Transformit to produce the best possible result within the very short 30-day timeline. From Digital Kitchen’s sketches, the shape was developed in cart by Digital Kitchen, Transformit, and FTL Design Engineering Studio. Once the shape was agreed upon, FTL was charged with engineering a structure capable of withstanding hurricane-force winds of 115 mph, with a 2 times safety factor.

The disassembled agave travels in a single trailer. It is capable of being installed in three hours, on uneven or soft ground. The Aztec-like pyramid base supports the weight of several people, and the entire structure, including lights, can withstand wet weather as well as high winds.

At the core is an eight foot welded steel geodesic hub on six leveling platform feet. Each foot is loaded with 1,000 pounds of steel ballast. Stored in the base are 12 pre-aimed LED PAR lights with their transformers and control system. This base is covered with stretch fabric, with triangular openings where the 12 leaves attach. The pyramid base fits around the geodesic base. To speed assembly, the leaves are shipped fully skinned in fabric, and the LED lights representing thorns are left installed. A zippered trap door allows a technician to service the structure from within if necessary. Disassembly and load-out takes about an hour.

To date, the agave has traveled to Phoenix, San Diego, Denver, Chicago, Philadelphia, Boston, and Baltimore. The final event is in Atlanta, with a championship event to be held in Las Vegas.