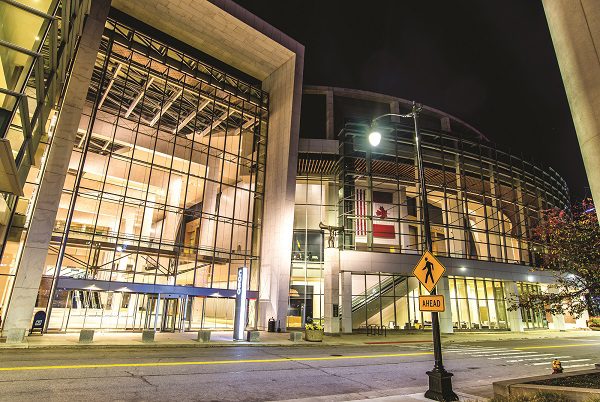 Located along a beautifully restored international riverfront in the heart of a vibrant downtown Detroit, the iconic venue is the 17th largest convention center in the U.S. It opened in 1960 and was originally named in honor of former Detroit Mayor Albert Cobo, whose vision to build a convention center was realized only after he died in office in 1957. In 2019, Detroit-based Chemical Bank (which merged with TCF Financial Corp. in 2020) bought the naming rights in a 22-year deal for $1.5 million annually. And on Dec. 9, 2021, it became Huntington Place after Huntington merged with TCF Financial Corp. in June of 2021.

A $279 million upgrade was completed in 2016 that transformed Huntington Place into a state-of-the-art facility including an 8,000 sq.ft. kitchen with a tasting room, a 40,000-sq.ft. ballroom (the largest ballroom in Michigan), a 30,000-sq.ft. three-story glass atrium; and 200,000 sq.ft. of flex space including exterior terraces. Huntington Place has free, ultra high-speed Wi-Fi available throughout the facility, two giant exterior video screens to promote events, programmable video displays outside every meeting room and hospitality services including information and business service center, full service executive meeting, conference and banquet rooms. Food and beverage service is provided by Centerplate and Huntington Place is a LEED Gold and GBAC-certified facility. It has also received numerous industry awards for excellence including the 2020 USGBC Leadership Award for Building Performance, making it the only convention center in the history of the award to receive it.

There’s a Detroit People Mover station located inside Huntington Place which makes 13 stops around downtown including Greektown, the Renaissance Center and Grand Circus Park, which you can use to quickly get to a Q-Line station. Nearly three miles of uni-directional elevated track, the People Mover has a top speed of 56 miles per hour, looping downtown in about 15-20 minutes for 75 cents.

ASM Global has been managing the day-to-day operations for Detroit’s convention center since 2010, establishing the venue as a top convention center both nationally and internationally which, prior to 2020, attracted nearly 1.5 million visitors annually.

During the suspension of events in 2020 because of the COVID-19 pandemic, the center supported the greater Detroit community by distributing more than 3 million pounds of food to date to agencies that aid local residents; sterilizing PPE for local area hospitals; becoming a temporary overflow field hospital; serving as a 2020 election ballot counting center; operating a day center for homeless services; and becoming a drive-through location for COVID-19 vaccines, which is still an ongoing effort.

Also, Detroit artist Hubert Massey was commissioned to create a large fresco at Huntington Place. Dedicated in Sept. 2018, it’s a signature piece in Detroit’s collection of public art and depicts a panoramic view of Detroit’s historical legacy dating back 300 years.