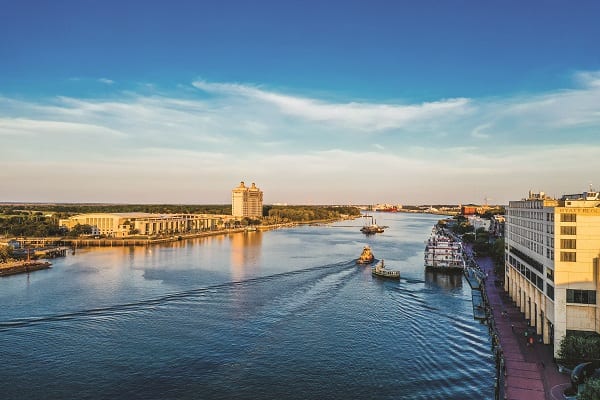 Savannah, the oldest city in Georgia boasts one of the youngest convention centers in the country. The 330,000-sq.ft. Savannah Convention Center opened as the Savannah International Trade & Convention Center in 2000 on the 2,000- acre Hutchinson Island. It is a state-owned building on state-owned property, built by Chatham County, and operated under the auspices of the Georgia World Congress Center Authority (GWCCA), which also manages the Georgia World Congress Center, and the Centennial Olympic Park in Atlanta.

It was designed by Thompson, Ventulett, Stainback & Associates of Atlanta and Hansen Architects of Savannah. The same team is currently involved in a $275 million expansion that is slated to break ground soon and is scheduled to be completed in the summer of 2023.

The convention center offers one of the loveliest entrances to any convention center, if one chooses to reach the facility via one of the free Belles Ferries that take the three-minute journey across the Savannah River from 7 a.m to midnight seven days a week. The ride is short enough that the historic district across the river may as well be across the street. The historic district includes the Hyatt Regency, Savannah Marriott Riverfront and Desoto Hotel, accompanied by many other lodging options for convention and tradeshow attendees.

Hutchinson Island was primarily used for industrial purposes, supporting the cities shipping industry and more, but in recent years a number of public/private projects have sprouted up on the seven-mile-long island including several hotels and the Westin Savannah Harbor Golf Resort & Spa, which is adjacent to the SCC.

The facility has been struggling with growing pains for a few years, but due to its relationship with its parent organization, the Georgia World Congress Center, it punches above its weight. Officials note that the facilities systems, WiFi, IT security and the bandwidth are much larger than most convention centers of its size.

Plans for the expansion have been in the works for a few years and will double the current 100,000-square-foot exhibit hall space. It will also add a 60-foot-wide hangar door, a new entrance, outdoor space and a second ballroom. At 40,000 sq.ft., the new ballroom will be nearly as large as the facility’s current 42,000 sq.ft. ballroom. The expansion is set to add 15 meeting rooms and 900 parking spaces. A hotel, set to be constructed with private funds, is being planned just west of the center.

The expansion will bump the SCC up from around the 155th largest to the 70th largest, which will put the facility into a new tier as far as the size and type of conventions and tradeshows it can attract. The management expects to bring in larger and more diverse conventions with little difficulty as the city has been experiencing a bit of a boom in the hotel industry. By the time the expansion is complete, they expect to have an additional 2,500 high-end hotel rooms in close proximity to the building.