The feats of modern and ancient Olympic athletes were told partly with the help of tension fabrics-supplier Cees Smit as the famous London Royal Opera House was transformed into a museum showcase of Olympics history during the recent games. 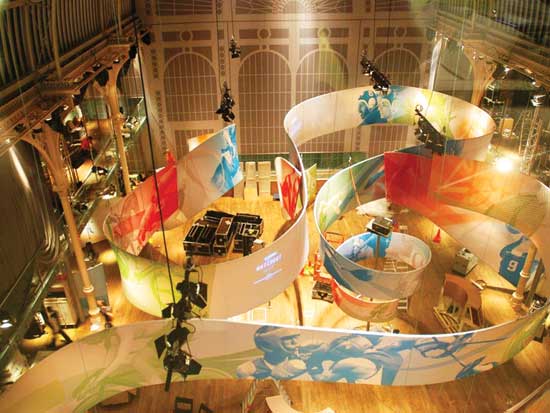 Entitled “The Olympic Journey,” the massive exhibit proved popular during the recent London Olympic Games held from July 27 through Aug. 12. It provided a visual history of the Olympics, from the ancient games through to the modern day version just held in London.

Although the exhibit was designed and maintained by Hypsos, an international design and fabrication company, Cees Smit was tapped to produce the unprecedented, continuous length of tension fabric some 8 feet high and extending 650 feet in length from a single piece.

The fabric was stretched over both sides of an aluminum frame and contained static as well as projected images, giving the piece an eclectic blend of history and movement.

In addition to the innovative display, Cees Smit placed a large, printed cotton panel measuring 50 feet by 50 feet and containing blackout material over a large glass wall to decrease light intensity and enhance the exhibit’s ambiance. Cees Smit also created and installed several large-format cloth prints and drapes to adjust the atmosphere inside. The team had no more than 36 hours to erect and complete the display inside the historic Royal Opera House before the games were underway, making for a logistical as well as technical challenge to produce and complete the innovative designs.

How much notice were you given regarding your role in the project before the Olympics began?
We were first contacted by our client in September 2011. Initially, we advised about the possibilities and options that were available and used reference material so the client could come up with the best design possible. Finally, we were selected over other vendors because of our expertise, knowledge of fabrics and price.

What challenges, if any, had to be overcome in creating the 650-foot length of fabric?
The first challenge was that the real installation in London had to be done in 36 hours, and we needed to be finished right before the opening of the Olympics. To overcome this hurdle, we did a test installation where all could be fine-tuned. All assembly parts were marked in the final configuration, so when the final installation took place, no mistakes could be made by misplacing or misconnecting parts. Because of the excellent planning, the complete project was built in 24 hours.

The second challenge was at the installation site. All that was used for the complete project (AV, fabrics, etc), were stored in a room next to the Paul Hamlyn Hall at the Royal Opera House. The challenge was that everything needed to go to a door opening of about 7 feet by 7 feet, which made good logistics essential. Our client did this perfectly. The overall management was done by them so all parties involved could work smoothly and efficiently.

What type of fabric was used to make the 650-foot piece?
Because this is a three-dimensional shape (but two-dimensionally bent), the only logical option would be to use our four-way stretch material. This ensured that no wrinkles would occur. To make the installation easier, all parts were made as a pillowcase with a zipper on top instead of using a bead and a channel.

Is that the largest/longest display piece ever made of tension fabrics?
We have made a 740-foot ribbon in October 2010 for a Hilton exhibition [in Orlando].

Were Cees Smit employees involved in erecting The Olympic Journey display?
Yes. A team of 12 Cees Smit specialists built the complete structure in 24 hours, working in 9 hour shifts, with one overlapping hour between the teams. An additional crew of three was responsible for installing a huge print of 50×50 ft, with a weight of almost 200 lbs. This was done by means of stapling it to a wood piece of timber that was placed on the metal of the glass facade of the building.

With a 36-hour window to erect the display, how did crews prepare for the feat?
The crew arrived on Tuesday afternoon, July 24, in London. On Wednesday, a site survey and introduction of all parties involved was scheduled. After that, everyone rested until 10 p.m. Everybody helped with bringing in all parts from the warehouse area to the installation area. The day crew left at 1 p.m., and the night crew continued their nine-hour shift [and continued rotating shifts until completion].