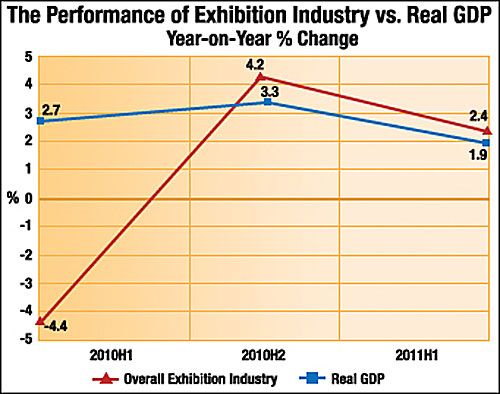 The tradeshow industry has outpaced the GDP in the first half of 2011.

The Center for Exhibition Industry Research (CEIR) has released semiannual data that shows the overall exhibition industry gained 2.4 percent during the first half of 2011. The increase outperformed the overall U.S. economy, which saw GDP increase by 1.9 percent over the same period. Given the current state of the global economy, this is positive news for the exhibition industry and a key topic of discussion that will be presented at Predict: CEIR’s annual outlook conference on September 15 in New York, NY.


“During the first half of 2010, the exhibition industry lagged the macro economy,” said Allen Shaw, CEIR economist. “But the exhibition industry finally emerged from the Great Recession and saw an impressive rebound in the second half of 2010, gaining 4.4 percent from a year ago. The latter was stronger than the increase of 3.3 percent in real GDP. After the impressive rebound in the second half of 2010 of 4.2 percent, the growth of the CEIR Index in the first six months of 2011 steadied to 2.4 percent in spite of the U.S. economy weakening. Overall, the exhibition industry outperformed the economy as real GDP gained only 1.9 percent year-on-year and payroll employment was relatively flat.”

This growth is expected to continue through 2011. Predictions through 2013 will be presented at CEIR Predict when attendees will participate in a discussion about the global economy through an interactive discussion and analysis of the U.S. economy and the exhibition industry. This session will be conducted by Dr. Shaw and Jeffrey Werling of Inforum, who will report on the real-time impact that economic and political forces may have on exhibitions and events serving various industry sectors.

The exhibition industry experienced an overall increase of 1.0 percent when compared to the same quarter of the previous year.

Zeroing in on a quarter-to-quarter comparison, results were not as strong as the first quarter of 2011 but increased slightly over the same period in 2010. The exhibition industry experienced an overall increase of 1.0 percent when compared to the same quarter of the previous year marking, four consecutive quarters of growth.

Parallel indicators of recovery of net square feet, exhibitors and attendees all showed increases with real revenues as the only indicator, showing a slight decline of 0.2 percent. This is in stark contrast to the decline of 8.3 percent in 2010. Net square feet of exhibit space sold showed an increase of 2.8 percent, exhibitors increased by 0.5 percent and attendees increased by 1.0 percent.

The CEIR Index, released in April, reported that the overall exhibition industry hit bottom in 2010, and that the industry should see a modest recovery during the next three years in all metrics across most sectors. The Index provided guidance to watch for positive changes in Attendance which would be a positive indicator for the industry, and Attendance has consistently shown growth for the past seven quarters.