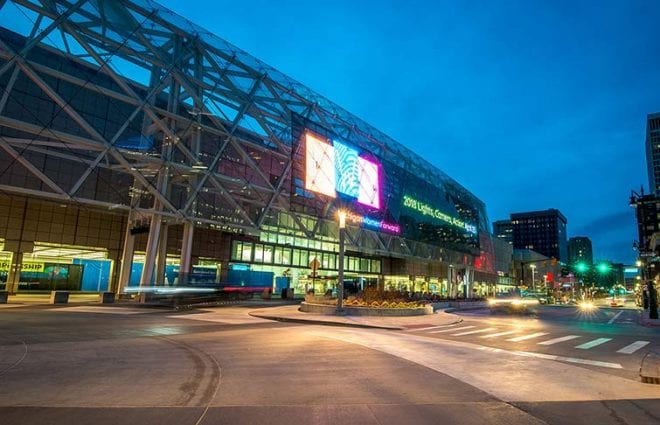 Claude Molinari, general manager of SMG/Cobo Center, says that revenue for technology services in the facility is up 58 percent compared to last year, while WiFi remains free to visitors and events as a sales incentive.

“Facility-wide free WiFi in Cobo Center differentiates us in the market, and has been free of charge since the installation of the original network in 1997,” says Molinari. “The current 4G WiFi network and can handle 30,000 simultaneous users, although we frequently customize the system to accommodate events for higher usage.”

During the recent $279 million renovation, Cobo Center upgraded its technology services offering to include digital signage, a broadcast studio with a facility wide fiber network and a 10G Internet network built with an inherent 40G capacity. Upgrades in the WiFi network allow a “splash page” that users see when they sign on to the network. The feature is activated when events sell a sponsorship on the splash page that allows users to see logos and other visual graphics from sponsors. The enhancement has been used to boost event revenue this year for the North American International Auto Show, the SAE WCX World Congress Experience 2018 and the FIRST Championship held in Cobo last month.

“Technology upgrades during the renovation were staged to continuously meet customer demands into the future,” says Molinari. “The increase in revenue reflects the effectiveness of our in-house strategy, the industry’s growing use of advanced technology for gaming, virtual reality, augmented reality, and video and streaming video in exhibits and presentations. We are ready for all of it.”

The addition of an interior digital signage system in Cobo, which displays graphics and video for events, reduces the need for other types of signage that may end up in the waste stream. Both the interior and exterior digital signage gives events additional revenue stream opportunities with sales of advertising and sponsorships. The 3,000-square-foot exterior digital sign on the corner of Cobo Center at Washington Boulevard and Congress Street, displays advertisements, and has earned Cobo Center more than $1 million in ad revenue since its installation in 2015.