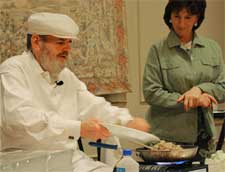 New Orleans, La. rightfully claims a spot as one of the world’s top dining destinations and the experience for convention-goers should be exceptional as well.


MCC is seeking bids for a food service contractor to start work in 2011. In its search for a new food service contractor, the center is trying a unique approach to attract a bidder who understands the essence of New Orleans food, and will be able to successfully help the center distinguish itself as a venue with the highest culinary standards, as befits a city that is known for exceptional food and dining experiences.

A mandatory pre-bid meeting was held in the MCC Ma Maison VIP dining suite where seven prospective bidders were addressed by local industry leaders impressing upon them the important role the winning bid will play in the convention economy of New Orleans.

“At lunch, we’re talking about what we’re going to eat for dinner,” said Lusk.

The afternoon wrapped up at the MCC with a cooking demonstration by Chef Paul Prudhomme, who is credited with the renaissance of New Orleans cuisine.

Chef Prudhomme demonstrated the preparation of beef tenderloin and gave prospective bidders a taste of the unique attributes of New Orleans-style cooking.

William Caruso and Associates is a food and beverage industry consulting firm hired by the Convention Center to assist them through the bidding process.

“I’ve been in this business for over 40 years and this process is one of the more unique I have experienced,” said Bill Caruso, owner. “The New Orleans Convention Center is looking for a very special focus for its food service program of the future. I am certain the bidders got that message loud and clear.”