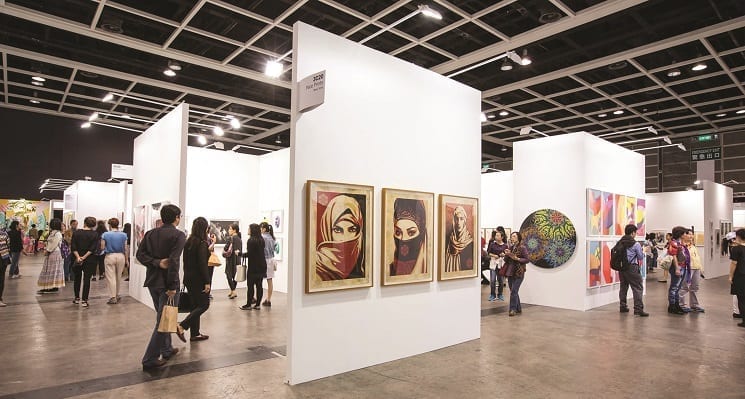 (Pictured above: Art Basel Hong Kong had to shift viewing for its popular art galleries to a virtual trade show due to the coronavirus pandemic. Photo courtesy of Art Basel)

With the entire exhibition industry upended by the COVID-19 pandemic, many show organizers have been thrust into the unfamiliar world of virtual tradeshows—a place many actively resisted visiting until they simply had no choice. For organizers who had already created hybrid virtual/live events, the digital offerings often merely consisted of recorded content, live-streamed presentations and links to exhibitor information. Few had developed a unique and engaging platform designed to make virtual attendees feel like they were part of the event.

But today with tradeshows being canceled by the thousands and sales funnels still needing buyers, the pressure is on organizers to create virtual events that replicate the show experience as closely as possible, right down to social hours and “manned” exhibits on the show floor. Exhibitors are being challenged to create a digital presence that will augment that pseudo-live experience as well as give attendees access to product information and company sales people, with exhibitors in some cases even setting up their display and interacting via a webcam during show hours.

For some products, this is a challenging scenario. Food and beverage suppliers like those who exhibit at the National Restaurant Show or the Nightlife and Bar Show are hobbled with no way to provide samples of their offerings and very few have opted for a virtual event rather than a cancellation or postponement. One food-related show that went virtual was the United Fresh Produce Association, which launched United Fresh Live! as a free virtual event to connect those who would have otherwise met at the in-person event. “During these past few weeks, we’ve all learned something about connections,” says United Fresh President & CEO Tom Stenzel. “While we can’t wait to join with industry friends again in person, we’ve also realized that we’re connecting today in new ways. We’re all online, with video streaming, face-to-face chats, and group interactions that, just a month ago, we didn’t know how to do.” While it doesn’t have product sampling, the virtual offering provides many other experiences such as keynotes, roundtable discussions, networking events and a virtual tradeshow floor.

Other products that struggle in a virtual tradeshow world are luxury items like watches and jewelry, sporting good items that buyers need to handle to truly appreciate and, ironically, digital or virtual products that virtual attendees won’t have the opportunity to manipulate themselves. Even textiles vendors are having challenges attracting buyers who are conceivably put off by the inability to touch fabrics to evaluate them. Case in point, the twice-yearly Canton Trade Fair in Guangzhou, China, typically attracts 180,000 foreign buyers who spend just shy of $30 billion on deals at each show. But early feedback from exhibitors who participated in the virtual event is that they had little traffic to their virtual booth on the platform.

Art Basel’s Hong Kong fine art trade show was fortunate to have already had a virtual platform in the works, so when COVID-19 came along, it hustled to finish the software and launch in time for this year’s show. The virtual product is designed to augment what is happening in the live event, but in a pinch, it had the tools in place to serve a remote audience with presentations as well as virtual tours through showrooms.

The challenge when setting up a virtual event, says Frame—a media brand for interior designers—is understanding what attendees want from it. “When people talk about why they still value physical events,” Frame blog author Peter Maxwell writes, “what they often cite is the way in which tradeshows help them build business-critical relationships. That’s why, rather than focusing on how to create digital proxies of their live formats, understanding the type of relationship attendees hope to cement is critical to any event’s virtualization strategy.”

There is an assortment of virtual tradeshow software companies, with more springing up every day now that a pandemic has emptied show halls. But the reality is that such technology is expensive and beyond the capabilities of many small shows. In such cases, providing less sophisticated platforms such as live-streamed presentations, digital chatrooms or networking sessions and exhibitor product information carries with it little cost while still keeping buyers and sellers connected. In the case of United Fresh Live!, officials said 40 percent of the first 1,000 registrations were people who had not attended the show before, which suggests well-developed digital offerings might be a worthwhile investment for any show hoping to extend its attendee list.

While everyone seems to agree that face-to-face marketing is the gold standard for a sales environment, some think that, as virtual events become the norm, it could signal the death knell for the exhibition industry as we knew it pre-pandemic.

The tradeshow industry has bandied for the past decade about the prevalence of virtual events and whether they would surpass live events eventually. That debate rages on, especially now with marketers and buyers who need to do business forced to participate in virtual events when they would have typically attended one in person. With more time, it might become the norm, some speculate.

Researchers of the exhibition and event industry don’t think so. “Tradeshows are very sensory in nature,” Cathy Breden, CEO of the Center for Exhibition Industry Research, told Crain’s New York Business. “You use all five senses to feel and experience them, whether that’s examining a new product or shaking someone’s hand to build a relationship.”

In an article discussing the question of whether virtual tradeshows would replace in-person events, Retail Wire enlisted the feedback of dozens of executives affiliated in some way with exhibiting. Some said yes they will, noting that once company executives on both sides of the aisle see how much money is saved by a virtual event, many will put the kibosh on travel budgets.

Others in the Retail Wire “brain trust” felt that, while virtual events in the future may take a bite out of in-person events, tradeshows will eventually be buzzing again with live attendees because a digital connection cannot replicate that experience. “Virtual conferencing is an excellent temporary replacement for face-to-face meetings,” says Ed Rosenbaum, CEO of Rainmaker Solutions. “After the dust settles we will continue to see more virtual meetings conducted during the sales process. The one thing that cannot be accomplished by these virtual meetings is chemistry. Chemistry is important to develop during the sales process. It is often the one thing that will separate one company from another with all other factors being equal.”

Others agree, noting “Zoom-fatigue” and the misery of sitting in front of a computer for hours on end. “I can see the continuation of virtual conferences or meetings. But a virtual tradeshow makes no sense to me,” says Gene Detroyer, an international business professor at Guizhou University of Finance and Economics. “I have been on both sides of tradeshows. As an exhibitor, I always had to take deep breaths because of how much they cost. But I could never see an alternative. The personal interaction it creates with the product and the people is priceless. Given a choice to spend less or more, I always chose more.

“And the same goes for the other side. You spend days walking aisles to find the one thing that fits your needs. As awful as those days were, I can’t even imagine how awful being online for days doing the same thing would be.”