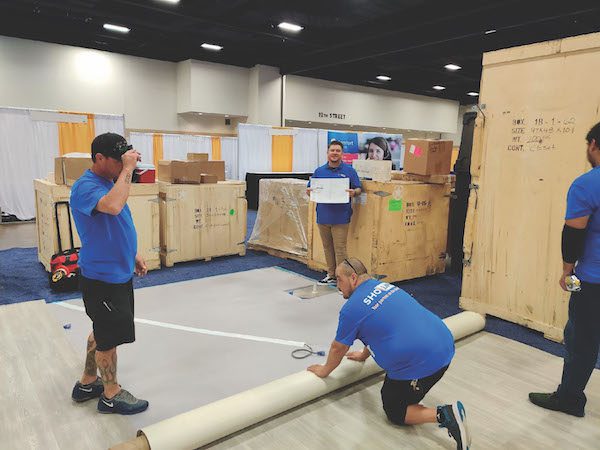 Exhibit City News is thrilled to return to presenting our I&D ACE Awards honoring the men and women of I&D.

At EXHIBITORLive in Las Vegas, we honored two Summer 2022 ACES. The first is a Rookie of the Year from Sho-Link Dallas, Michael McDaniel, and the second, a Lifetime Achievement Award ACE for the former owner of Zenith Labornet, John Zimmerman.

Sho-Link VP of Operations Rob West says of McDaniel, “It’s not often that a new employee is able to lead booths, communicate with customers, and assist fellow teammates to get the job done. Yet Michael McDaniel came onboard with these skills and the type of attitude that says, ‘Yes, I Can!’”

Michael’s direct supervisor in Dallas, Marc Santos, shares, “I knew after about two weeks that I had someone very special. He is leading booths and providing a level of customer service that’s rarely seen even in 10-year leadmen. Michael can spot problems and fix them before they even happen. His laser focus on safety and making sure every detail is met or exceeded is what makes him so unique.”

President Patrick Lancaster says, “John started his career at I&D Group and then later opened Zenith Labornet. For more than 25 years Zenith produced quality labor and network services. John’s ability to forecast the future needs of the I&D industry is second to none. More importantly, his direct competitors always remained his friends. Integrity has always been a priority, and his success of selling Zenith a few years ago proves his accomplishments and his great nature of providing a great service and running a very successful business. He never misses an event or opportunity to help in charity or just in passing. John has been a mentor to me for more than 20 years and I couldn’t and wouldn’t be where I am today in this industry if it wasn’t for his kind and candid nature.”

ECN would like to congratulate both Michael and John as our newest inductees in the ECN I&D ACES Hall of Fame.

ECN will be accepting submissions for I&D ACE awards all year and will be traveling regionally to present them locally throughout the year.