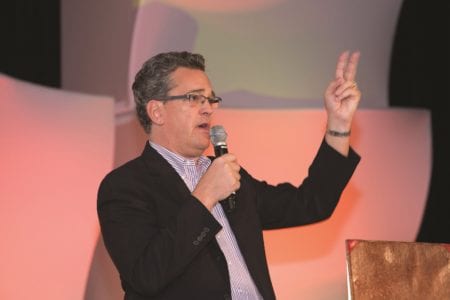 Eight years ago, when Red 7 Media (now Access Intelligence) assumed the association management duties of the Exhibit Designers and Producers Association, Jeff Provost (left) was at the helm. “I had been working with one of Red 7’s companies, The Event Marketing Institute, when my friend and industry mentor, Michael Westcott, urged me to take the newly created position of executive director of EDPA, said Provost. “ Michael could see some synergies with my background; I wasn’t quite as certain as he was, but I trusted his judgment—and he was right.”

Fast forward eight years, and in the reorganization that usually follows acquisitions, Access Intelligence decided to close the association management segment of the business. Now what? During the past 25 years, EDPA had been managed by three companies, including Red 7/Access Intelligence. Continuity was definitely an issue. Rather than spearhead the arduous process of a search for a new management company, EDPA board members chose another option, one presented by both Provost and Access Intelligence: the formation of a new company, headed by Provost himself, with limited support from his former employer until operations were up and running. The goal was to make the transition from one company to another as seamless as possible, with no disruption in the day to day running of the association.

The launch of PRO Management LLC

With that in mind, Provost launched PRO Management, LLC, earlier this year. “It has been an intensely busy year,” he said. “Going from a supportive company to my own startup is at least a 24/7 job. Most recently this involved moving our offices to a new location. Even though we’re still in Connecticut, anyone who has ever been part of such a move will feel my pain. On the other hand, this is an exciting new venture for me and my staff. We have developed a company model that can accommodate multiple associations, not just EDPA. The future of PRO Management LLC is very bright.”

Provost has long been involved in non-profit management. With an MFA from Yale, where he learned not only management skills in this field but also how to bring the vision of association members to life, he sees his role as not “boss,” but the steward of the organization’s goals. “Particularly with an organization like EDPA, where everyone is totally engaged in running businesses, it is critical to have a person whose main job is taking the directives from the board and making them happen,” He explained. “There are the initiatives and events that all our members see such as ACCESS, our annual conference, our newsletters, and our award programs. However, there are many behind-the-scenes tasks that are necessary to keep EDPA running day to day. Financial stability was an issue when I first came to EDPA, and I am happy to say that with the support and assistance of the EPDA executive committee, I helped move the association out of the red and into the black. I need to make sure that continues. I am also a fervent believer in professional member recruitment as well as retention. The industry is changing, and as younger people take on jobs in the builder and design community, we want to build their affinity with EDPA.”

To facilitate his membership objectives, Provost hired Doug Rawady as the new EDPA sales manager. “Doug has a deep sales background and social media skills,” he said. “We can’t leave membership to chance or rely on overworked committee members to take on this task.” In addition, earlier this year, he hired Michelle Wilson to be member services coordinator. Watson has extensive meeting management skills as well as a background in medical education.

This year, as he has for the past eight years, Provost’s third quarter task is developing the program for ACCESS, which this year will be held in Orlando. “With the support of Red 7/Access Intelligence, we have laid a great foundation for EDPA’s future—and as executive director, I plan to keep our association on track. Education, membership, financial stability—and more: these are my directives, and PRO Management LLC is now ready to make sure we deliver.”