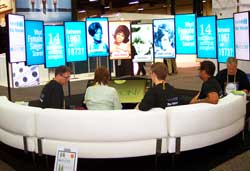 The honor for Best of Show, Large Exhibits went to Blue Telescope from New York City.

Considering that many of the most prominent and successful exhibit design companies attend EXHIBITOR each year, it’s quite a distinction to win one of the expo’s Best of Show Awards. As expected, exhibit design firms garnered three of the annual accolades while furniture rental giant CORT snagged the honor of Best of Show, Small Exhibits for its 10-foot by 20-foot exhibits, Lounge22 Powered by CORT.


Marketed as the world conference and exhibition for tradeshow and corporate event marketing, EXHIBITOR2011 attracted about 240 exhibiting firms for its five-day run, which was March 27th to 31st at the Mandalay Bay Convention Center in Las Vegas.

The honor for Best of Show, Large Exhibits went to Blue Telescope from New York City for its rather simplistic, yet effective, 20-foot by 20-foot exhibit, showcasing a Microsoft Surface interactive and multi-touch table and a video wall. The only other components in the exhibit were a couch and two end tables.

“We are very big into clean design and we knew it would be effective,” said Brad Barton, producer for Blue Telescope. “Attendees have been very receptive.”

Judges liked Blue Telescope’s exhibit because “the booth design made it easy to enter and engage in the activity presented. The exhibit was not only attractive, but functional, and it clearly presenting the company as an experiential program company.” 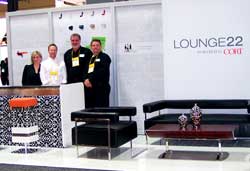 “We loved the eye-catching exhibit of Lounge22 Powered by CORT,” said the EXHIBITOR award judges. “We especially enjoyed the use of black and white colors that draw you in to touch and feel.”

“Lounge22 furnishings are very modern, unique and have clean lines that attract a high-end clientele,” said Kevin Dana, CORT’S director of marketing and product development, tradeshow and event marketing. “It is for a very niche market. The red snack skin cocktail table is really hot.”

Tangram International Exhibitions prevailed over 55 other companies for the honor of Best New Exhibitor. 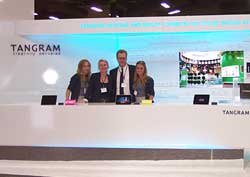 Tangram International Exhibitions prevailed over 55 other companies for the honor of Best New Exhibitor.

The judges were impressed by the Tangram staff’s professionalism and engaging attitudes while working the aisle and asking qualifying questions.

“You can not walk by this booth without knowing what we do,” said Steel Swift, owner of Tangram, Pleasantville, New York. “We wanted to express our brand values without being overwhelming and our sculptured back wall does that. It is more of an art piece.”

The corporate exhibit managers who awarded Derse the Best Booth Staff honor liked the very friendly, well-organized way that the Derse staff approached them and the way that they listened. 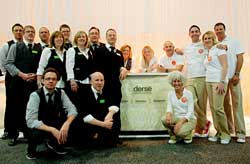 Other judges commented positively on the assertiveness of the booth staff and how they were very interested in bringing you into the booth.

EXHIBITOR2012 will meet from March 4th to 8th, 2012, at the Mandalay Bay Convention Center in Las Vegas.

Aleta Walther is a marketing communications professional and freelance writer with several years experience as a corporate exhibit manager. Contact Aleta at: Aleta@prwriterpro.com