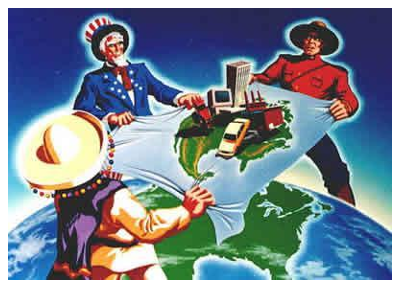 When the North American Free Trade Agreement between the United States, Mexico, and Canada was enacted in 1994, it created the largest free trade area in the world, linking what officials estimate to be some 444 million people producing $17 trillion in goods and services. Though politicians have differing opinions regarding the overall benefit of the agreement for the United States, few will dispute that NAFTA eliminated borders and streamlined trade between countries in a way that many companies reaped profits from.

At its core, NAFTA is about importing and exporting goods without tariffs between the three member countries of North America. But it is intrinsically tied to the exhibition industry because those traded goods are virtually all marketed to a NAFTA audience via a trade show marketplace. As such, myriad exhibitions catering to industries participating in the cross-border trade have flourished, and exhibitors at those shows have become accustomed to finding a receptive audience for their products regardless of where the show was taking place thanks to the absence of additional taxes.

However, President Donald Trump positioned NAFTA among his campaign promises as something he would repeal, and even the suggestion that it will be rolled back in the future is causing upheaval in some trade show marketplaces. Already, U.S. exhibitors are reporting that sales are down at shows catering to Canadian buyers as currency value has fluctuated since last fall’s election. But others, particularly those in the automotive industry with production in Mexico, say that while nothing has adversely affected them yet, they are wary of changes to the agreement that could ultimately render their products more expensive in the marketplace and, as such, less competitive.

Detractors of NAFTA are quick to point out that the agreement appears to have had an imbalanced impact between Mexico, Canada, and the United States. But the imbalance can’t be measured exactly across country lines, or even industry lines, as there are winners and losers in the trade game in a variety of unexpected places. In agriculture, for example, U.S. tomato growers have long lamented the negative impact imported produce from Mexico has had on their livelihood. The U.S. Department of Agriculture estimates that tomato production in Florida – where production is highest in the country – has dropped by 41 percent since NAFTA’s inception. Cotton growers, however, have benefitted from NAFTA, as it gives their cotton preference for Mexican-made textiles. If Mexican garments were to incorporate fibers from non-NAFTA nations, then they would not enjoy the same free trade perks in North America, meaning the addition of tariff’s totaling anywhere from 17 to 32 percent.

Likewise, while some states and industries as a whole are trading at a deficit with Mexico or Canada, others operate on the positive side of the arrangement, leaving a mixed bag of results when various groups are surveyed on their NAFTA position.

Mexican officials said they are open to modernizing the agreement, but they have promised retaliation against border taxes for Mexican goods. Canadian officials have indicated a similar willingness to make adjustments to the agreement, but some say perhaps a better approach for Canada is to make specific trade agreements with individual states where it shares a great deal of commerce.

And Trump’s transition team has issued recent statements suggesting that his promise to repeal the legislation may be replaced by a more measured approach that promotes tweaks in certain areas rather than tearing up the agreement. For the exhibition industry, the debate creates considerable uncertainty, as with no real idea yet what may transpire, no one is quite sure at this point who might be affected or to what degree. For all, it will be a waiting game through upcoming political machinations to see what repercussions for the exhibition industry will hang in the balance of any future changes to trade.