Globalshop 2010: a walk with a tradeshow pro 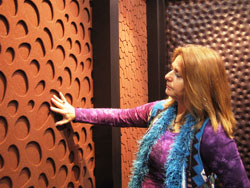 We knew it was going to be a crazy week when Tony Helfman, general manager of Access TCA, Inc in Las Vegas, and I agreed to walk the floor of Globalshop. But with its focus on retail design, in-store marketing and technology, the show has been a valuable source of inspiration in the past for many in the tradeshow industry. From fixtures to materials, to exhibit ideas, there was lots of potential – at least potentially.

That’s not to mention the fact that several large exhibit houses also have retail divisions. This year, some 700 exhibitors were expected to present their products on 300,000 square feet of space at the Sands Convention Center in Las Vegas March 10-12.


Attendance numbers for the show weren’t available as of press time.

Helfman was just back from the install of the EXHIBITOR show across town and he still had to head back. Pinning on his badge, he grabbed a bite of a bagel with cream cheese and took a gulp of coke, but his energy is from being in his realm.

“Check out this one,” he said, already past the first few exhibits and pointing at a sleek environment by Leggett and Platt, manufacturer of store fixtures, as well as furniture.

What caught his eye was a veneer wall system that creates a polished wooden look and at the same time has usual modular capabilities.

“I bet you can use it for an on-site clinic or a retail setting that you have to construct quickly and with limited resources,” he said. “And it looks nice.”

We made our way passed rows of exhibits and suddenly a lineup of rotating cars jumped out at me. Zeno Motion brought a backlit sign concept that makes static images interactive. They move as you move. In their booth, the panel spans the length of the 20-foot wall and is seamless thanks to the modular design.

“Sure stopped you in your tracks,” Helfman said. 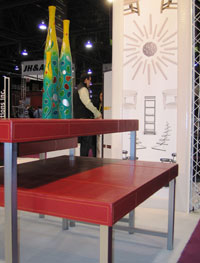 This year, 700 exhibitors were expected to present their products on 300,000 square feet of space at the Sands Convention Center.

And then he pulled out a camera and pointed it at an exhibit that seemed to defy any drayage concerns. It was encompassed with beautiful steel flowers that had been powder-coated and welded together, and it’s impossible not to touch them. This 14-foot tall structure belonged to Amuneal, a company that designs and makes retail fixtures, furniture and custom lighting out of metal.

“We wanted to create a space that people would respond to emotionally, get them in a good mood after a difficult year, and flowers seemed like a natural choice,” said Adam Kamens, CEO of Amuneal.

The openings in the walls showcased miniature versions of other projects, such as architectural elements and public art. Inside, there was a leather boot displayed on heads of copper nails and silver tree branches supporting small objects. The place felt like a boutique I can’t afford. Helfman took a few steps back and kept taking pictures. It’s hard to go back to the show floor.

“Let’s see if they have any cool composites,” he said, and pretty soon we saw dry plants and flowers preserved in clear panels. Resin products manufacturer Veritas brought their new range of botanical products and once again, the first impulse is to touch and feel the texture.

“The idea is not exactly new,” Helfman said, but nevertheless, he touched the delicate outline of a leaf. “I wonder if they can custom-make this,” he added. Sure enough they can, and they can also shape the product for specific applications.

Tactile connection just doesn’t go away. Muzak Holdings, distributor of background music to retail stores, launched a new entity at Globashop called Touch, an “experience design and sensory branding firm.” Its space at the show became a great illustration of the concept thanks to the strategic application of custom music, video and scent. And of course, actual touch – large screens with touch capabilities helped the booth staff tell the story.

“Screens are another tool to make the experience more interactive and to incorporate online elements,” said Megan Carrigan, creative manager. “Our clients are looking for a whole experience. There is so much more value in that.”

For those looking just for scent, Ambius Microfresh brought scenting and odor remediation systems that can make even show home plastic fruit smell like an orchard but not in an intrusive way. In fact, even though several products were showcased in a small space of the booth, each scent was distinct and natural. I had to touch the leaves of a blooming plant to find out whether it was real.

We headed back passed a large red booth by Vira Manufacturing that focused on store fixtures. The large expanses of red don’t do much for Helfman, but then he paused. The clothes racks’ backdrop was made of black panels with glowing multicolored cutouts. It felt like an illustration to a European fairytale.

“That’s elegant,” he said. “And good design sensibility too.”