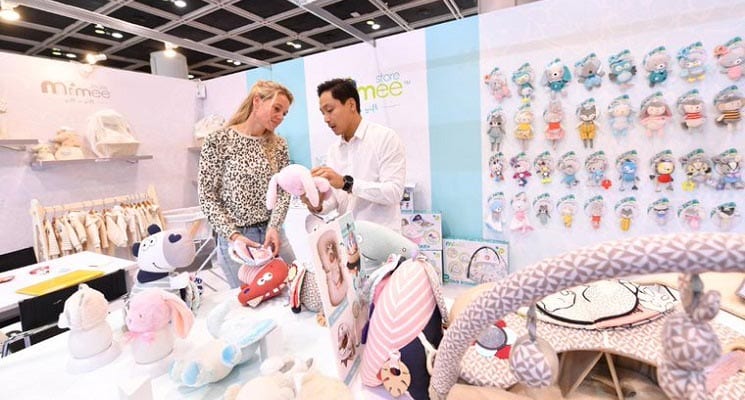 More than 41,400 buyers attended the Toys & Games Fair, while close to 28,200 and over 17,800 buyers visited the Baby Products Fair and Stationery Fair respectively. In addition, over 20,000 visitors attended the Licensing Show.

“In response to the recent social unrest in Hong Kong and external economic factors, the HKTDC has allocated more resources to invite quality buyers from around the world to source products in the city,” says Benjamin Chau, deputy executive director of the HKTDC.

Chau added that the sourcing activity at the fairs was buoyant, with smart products remaining popular among buyers. Toys and models targeted at the young-at-heart also attracted a lot of attention and brought new impetus to the market.

This year’s fairs featured an assortment of new products from about 2,950 exhibitors. At the Toys & Games Fair, new exhibitor Hanwang Technology from Mainland China showcased its Bionic Flapping Wing RC Flying Bird – GoGoBird Series, integrating intelligent sensing technology and artificial intelligence, in the Smart-Tech Toys zone. Yingjian Liu, the company’s Chairman of the Board, said they met new distributors from Germany, Korea and the United States in the first four hours of the show, with each distributor confirming to buy several thousand pieces on the spot.

Kidult World also received positive responses from buyers. Leo Wong, director of Bigboystoys Company from Hong Kong, said the company specializes in the design and production of licensed collectibles for characters such as Street Fighter, the King of Fighters and Ninja Turtles.

“This is our third year participating in the Toys & Games Fair, which provides an important channel for us to find new distributors and wholesalers and to secure new orders,” Wong says. “We have met with new buyers from Europe and the Middle East who are very interested in the King of Fighters figures. We will conclude orders with three or four serious buyers from Europe soon.”

Radek Ostrcil, owner of Czech Republic buyer Pyro & Art, attending the Toys & Games Fair for the first time, said the event offered a great choice of products. He found two potential suppliers for fireworks in the first two days of the fair.

“Each year, I buy around $500,000 worth of fireworks,” he says. “With the help of the HKTDC business-matching team, I will meet with more exhibitors and buy one container of fireworks.”

A new buyer at the Baby Products Fair, Kid’s Brasil is the biggest e-tailer of baby products in Brazil. Whelvis Cortes Naves, CEO and Co-founder of the company, says: “This is my first visit to the Hong Kong Baby Products Fair. I have found five new suppliers from Mainland China and will buy quality feeding and nursery items worth $200,000 from each of them. This has been a smooth and fruitful sourcing trip.”

Scott Wen, manager of Mirage International Industries from the U.S., said his company had participated at the Stationery Fair for 20 years because the visitors are all serious industry players.

“The fair is an important promotional channel for us because we found all our biggest customers here over the years, making up around 40 percent of our annual revenue,” Wen says. “This year, we are promoting eco-friendly products to meet demand from green consumers, attracting a lot of buyer inquiries from Mainland China, Hong Kong and Russia. We are happy with the results.”

The Hong Kong Trade Development Council (HKTDC) is a statutory body established in 1966 to promote, assist and develop Hong Kong’s trade. With 50 offices globally, including 13 in Mainland China, the HKTDC promotes Hong Kong as a two-way global investment and business hub. The HKTDC organizes international exhibitions, conferences and business missions to create business opportunities for companies, particularly small and medium-sized enterprises (SMEs), in the mainland and international markets. For more info, visit www.hktdc.com/aboutus.