How They Did It: Shanghai World Expo 2010 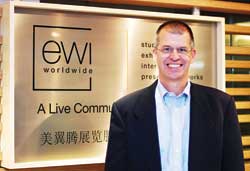 At 6 p.m. Zurich time, Ben Einer, vice president, international, for EWI Worldwide, is not even close to his last cup of coffee for the day. He was just at Bauma show in Munich, Germany and as the Icelandic volcano keeps flights grounded, he is spending a few days in Switzerland en route to Shanghai, where it will be back to supervising the final stages of creating the pavilions for the World Expo. U.S.-based EWI, a global, live communications company, works on several pavilions there, including Germany, World Wildlife Fund and the country of Belarus.


Einer has seen his share of world expos and expos in general. A 25-year industry veteran, most recently served as executive project manager on the British Columbia Canada Pavilion for the 2008 Beijing Olympics and for several years, worked in Dusseldorf, Germany as director of European Activity for Voblo GmbH and Co., a subsidiary of Exhibitgroup/Giltspur. While at General Dynamics, Einer managed the F-16 programs for the Paris, Farnborough, Dubai and Singapore Air Shows.

“Sometimes I feel like the pavilion business is like a disease,” he said. “You get it in your blood and you can’t get rid of it. With all different types of clients, it’s a true immersion in the cultural differences in this crazy business we’re in.”|

Exhibit City News: Ben, considering the scope of your work, what is project management like?
Ben Einer: We are having a lot of fun. We are working on the interior and exhibits of the 65,000-square-foot German pavilion together with the general contractor Nussli, a creative team from Milla und Partner in Stuttgart, and the architects from Schmidhuber and Kaindl in Munich. It is developed around the theme of “balancity,” both in the sense of balance in life and a city’s balance of preservation vs. renewal and tradition versus innovation. Among other elements, there is a multi-layered “landscape” that represents Germany’s 16 states, a sphere with 400,000 LEDs that responds to visitors’ movements and tells the story of diversity and contrasts.

The Germans have very high expectations; they’re selling “Made in Germany” brand. The project is headed by Koelnmesse International that works for Germany’s Federal Ministry of Economics and Technology. So it’s an interesting combination of players. There are other contractors for the lighting and audio/visual. We have a project manager from Germany, a project manager from Canada, and three project managers from China. You can’t imagine what the weekly meetings have been like for the past six months when you have all these people to get it done on time.

ECN: With so many different cooks, how did you deal with changes as projects got under way?
Einer: We were joking the other day that hopefully we didn’t have to do “as built” drawings. Changes had to be done for everything from fit and finish to orientation of things. There is not a square wall or ceiling in the German pavilion, it’s all different shapes. The design team used 3D modeling software, but the reality isn’t exactly the same. But we all put in long days and work as a team to deliver this project on time.

ECN: What is it like to work with a multitude of languages?
Einer: One thing I learned is never to depend on verbal communication. It’s the same thing with our Belarus pavilion, where the language of the client is Russian, business communication is in Russian and Chinese, and the execution and contract requirements are in Chinese. And then each of the exhibiting countries have contracts with the expo to rent the land or buildings, so business language is Chinese. It’s an exercise in patience. You spend a lot more time onsite to make sure everything is done right. You get what you inspect, not what you expect.

ECN: You worked on other world expos. Is there anything about this one that surprised you?
Einer: Complying with the rules is more difficult than on other sites. The rules change as you go along. You have to go through several layers of approval for submitting documents. One thing people don’t realize is how many things that are made in China are made for export only. You can’t buy them here. You have to ship them in, and in most cases their documentation is only for export, not for import. For A1 and B1 fire ratings, the Chinese wouldn’t accept local certification for the Chinese products. So we have to ship them first to a lab in a Western country to get certified. All that adds time. We have a project manager from Hanover who has done several world expos and even survived working in Japan, but even his patience you could tell was starting to stretch thin. But at the end, the results are fantastic.

ECN: Anything that particularly impressed you?
Einer: There are some fantastic bamboo structures. Architecturally, one of my favorite pavilions is Lichtenstein. Switzerland got a chair lift that goes to the roof of their pavilion and from there you can see the entire “country.” They Disney people have been by to look at it. At WWF, there is a giant globe aquarium. It’s quite interesting how it’s integrated into the exhibit and how much equipment it takes to support it. But in general the expo has done a tremendous job. There are two new subway lines that feed into the expo site so you really don’t have to have a car here. There are hundreds of restaurants and cafes, all new restrooms, and even recycled paper towels.

ECN: What are some thoughts you are taking away from this experience?
Einer: Never assume that you’ve communicated what you mean. Secondly, don’t expect to be able to find materials and products you can find wherever you’re from even if they are made in China. I also believe that anything is possible in China. You can build great things. You just need good communication tools.