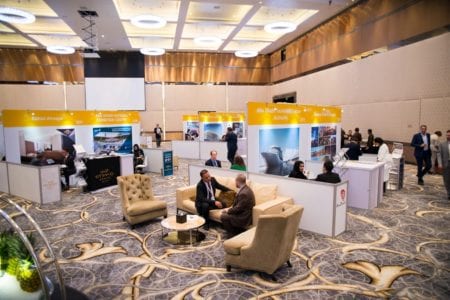 IBTM Arabia 2018, the leading event for the Middle East MICE industry, has seen an influx of high-profile international Hosted Buyers already confirmed to attend, following the introduction of its enhanced Hosted Buyer program, adopted across IBTM’s portfolio. The program sees the IBTM team pre-selecting and qualifying Hosted Buyers, allowing them to be fast-tracked through the process. This also enables IBTM to be even more targeted in ensuring only the highest caliber of Hosted Buyers are present at the event.

Abu Dhabi’s rising level of development and investment, as well as its enhanced connectivity and infrastructure, have driven the popularity of the city among meetings and events professionals globally. Testament to this is the number of high caliber suppliers already registered to attend IBTM Arabia 2018, the most established event of its kind in the Middle East MICE industry, taking place at Jumeirah at Etihad Towers in Abu Dhabi, from February 5-7.

According to the latest IBTM Trends Watch Report, launched at IBTM World in Barcelona, the Middle East is a maturing market, becoming a major player on the international meetings and events scene, thanks to its high standards of delivery both on the supply and demand side. The report quotes the Advito 2017 Industry Forecast that is seeing fleet expansion by Emirates, Qatar Airways and Etihad Airways, to meet the growing demand in the region–up 11.2 percent–allowing international delegates easy access to meetings and reducing the cost for international event planners.

IBTM Arabia’s market-leading Knowledge Program ensures attendees that their fingers are on the pulse of the latest industry talking points and developments. This year, the program will be headlined by keynote speaker Rohit Talwar, global futurist, author and CEO of foresight firm Fast Future, who will provide invaluable insight on how the MICE industry can anticipate, respond and benefit in a world of constant change. The program will also include a panel session led by ICCA (Int’l. Congress & Convention Association) on destination competitiveness.

On the final day of the event, Albert Dias, chief technology officer and co-founder of the UAE’s first full-service OTA – Musafir.com will explore how TMCs will need to bank on intelligence, rather than the outdated mainstay of service, to remain relevant in an era of constant change.

The format of IBTM Arabia has been designed to embrace the importance of networking and relationship building ahead of doing business, with 12 networking events held over the three-day-long show. The networking program will include the renowned White Party at Rotana Beach and a cocktail reception on the final evening.

IBTM Arabia attracts elite attendees from more than 30 countries each year, and had more than 2,100 pre-planned meetings during the 2017 event. The increasing demand in the region and the host city of IBTM Arabia is backed by latest industry reports* showing that four and five-star hotel construction continues to grow, with room occupancy typically ranging between 80 per cent and 85 per cent in popular destinations like Abu Dhabi.

On Abu Dhabi’s MICE offering, Shinu Pillai, exhibition manager, IBTM Arabia comments: “When IBTM first held an exhibition in the area, in 2007, the regional MICE industry outside of Dubai was only in its infancy. Incentives were largely absent from a wider landscape and large-scale meetings simply couldn’t be supported as venues were not yet built. Now, Abu Dhabi experiences a huge level of ongoing investment and development, meaning that new venues launch every year.

“A perfect example is the new Louvre Abu Dhabi which opened last month, with the Guggenheim and further major attractions due to open in the near future, adding to the city’s attractiveness in the eyes of event organisers and delegates. Another unique trait of Abu Dhabi, which makes the city an exceptional destination for meetings and events, is its major emphasis on networking and relationship building ahead of having formal meetings. Therefore, it is important that we continue to embrace the region’s local nuances and our attendees’ needs by offering, yet again, a comprehensive agenda of 12 networking events held over the three-day-long show.”

Pillai, exhibition manager, IBTM Arabia, adds, “Testament to the event’s importance and the weight it carries in the Middle East MICE market, IBTM Arabia attracts overseas suppliers from across the globe. Streamlining the Hosted Buyer process means added value for exhibitors, by targeting buyers matched according to exhibitor needs, as well as ensuring we make our Hosted Buyers’ time as productive as possible at the event, by helping them meet with people with whom they are most likely to do business.”

Adam Wing, international marketing manager, Bibby Financial Service, who attended as a Hosted Buyer in 2017, commented, “IBTM Arabia was a fantastically immersive event that combined business meetings with a city experience, and generated some great connections who I will definitely work with in the future.”

Reed Travel Exhibitions (RTE) is the world’s leading travel and tourism events organiser, with a wide-ranging portfolio of 22 international events in 13 countries throughout the Americas, Europe, the Middle East, Asia Pacific and Africa. Its market-leading, business-to-business events cover all elements of travel and tourism, including leisure travel, luxury travel, meetings, events, incentives and business travel, as well as golf travel. For more info, visit www.reedtravelexhibitions.com