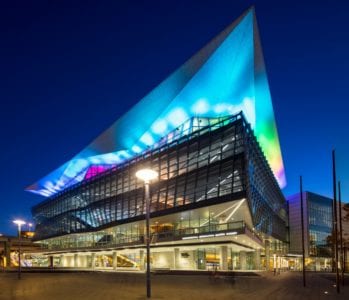 Recognized for its design excellence, construction timeline and outstanding financial performance, ICC Sydney’s role in delivering the nation a new and emblematic piece of business events and tourism infrastructure was commended.

Geoff Donaghy, CEO of ICC Sydney, said the venue was already performing extremely well for Sydney, New South Wales and the nation, having delivered almost 200 events and welcomed more than 300,000 people through its doors since it opened 20 December 2016.

“ICC Sydney is a new $1.5 billion events precinct that has been specifically designed to welcome more events and patrons to Sydney while providing the best possible experience for them whilst here. We’ve already received fantastic client feedback about both the venue and the service delivery of our team. A further endorsement of the venue, and our management, has been the repeat business confirmed by clients that have held successful events with us during our first months of operation.

“AEG Ogden is extremely privileged to be operating the venue and the entire team is very proud of the award bestowed on ICC Sydney’s design and delivery consortium,” he said.

Andrew Constance, minister for infrastructure, said he was pleased the venue was already living up to the aspirations the NSW Government had envisioned for it.

“ICC Sydney was delivered on time and on budget and we are happy to see it is already a key performer in the New South Wales infrastructure pipeline.”

“It is the epicentre of a 20-hectare transformation of Darling Harbour by the NSW Government to highlight Sydney as the first choice in Australia and the Asia Pacific region for the major events industry,” Minister Constance said.