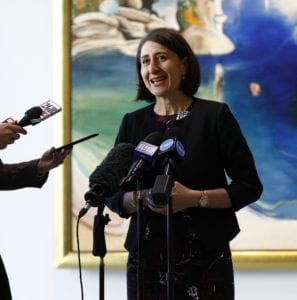 International Convention Centre Sydney is living up to its reputation as Australia’s premier convention, exhibition and entertainment venue, with New South Wales Premier Gladys Berejiklian (pictured right)  applauding its outstanding contribution to the local economy after addressing the 10th World Chambers Congress opening ceremony at the venue on Sept. 19.

According to new data, the venue has welcomed its one-millionth visitor and booked its 1,000th event. It is also outperforming both the former Sydney Convention and Exhibition Centre and the Sydney Entertainment Centre combined, with ICC Sydney delivering a 22 percent revenue increase during its first six months of operation when compared with the previous venues’ figures for their final six months of operation.

Says Berejiklian, “ICC Sydney is a new icon in our city and underpins Sydney’s reputation as one of the most desirable events destinations in the world. It is predicted to inject A$5 billion to the NSW economy over the next 25 years, and with 1,000 events already secured, it is well on track to deliver.

“ICC Sydney is also becoming a powerful nexus between the local visitor and knowledge economies. Indeed, the events it hosts bring industry leaders, global experts and delegates from across sectors to our shores – to share insights and connect with their peers, all in the heart of Sydney.”

CEO of ICC Sydney, Geoff Donaghy, said the venue is going from strength to strength, helping to drive positive economic gains for the State alongside new event records for clients. “ICC Sydney is proud to have welcomed more than one million visitors across over 500 different events, many of which have seen boosted success and attendance figures,” says Donaghy, adding “For example, the recent Sydney International Boat Show attracted 3,000 more visitors than originally anticipated and facilitated $250 million worth of business on site. It was the most successful show since the GFC and delivered one fifth of the State’s turnover for the entire boating recreational industry, equivalent to one tenth of the national industry’s turnover.”

Donaghy said ICC Sydney’s dynamic combination of multipurpose spaces, accessibility, focus on delivering memorable experiences and location in the heart of a multicultural city have been key to the city’s success in attracting clients, including the 18th World Congress on Medical and Health Informatics (MedInfo 2021) – the 1,000th event booked by ICC Sydney.

Dr. Louise Schaper, CEO of HISA, said ICC Sydney was the natural choice to host MedInfo 2021, which is expected to attract 1,700 delegates. “ICC Sydney offers an attractive combination of leading facilities, an unbeatable location and a team of passionate professionals,” says Schaper. “We believe it provides the ultimate in choice, comfort and convenience for our delegates, and will help to foster the best possible environment for collaboration and innovation.”

ICC Sydney works closely with the NSW Government and Business Events Sydney, who led the bid to host MedInfo 2021.

With a raft of events in the coming months, including the International Bar Association Annual Conference, Engineers Australia Project Controls Conference and the Royal Australian College of General Practitioners Conference, ICC Sydney is set to continue its stellar performance and reach its target of hosting 1,000 events annually by its third year of operation.

Launched in August 2016, the initiative has seen the development of tailored educational courses across hospitality, commercial cookery, audio visual, business administration and security. It is open to full-time and casual workers, as well as select students from TAFE NSW, and has been designed to support training to the highest industry standards.

“At ICC Sydney, we believe that it is our people who define our offering and underpin our success, and we are 100 percent committed to their growth and development. To date, we have invested in training to ensure our team is not only operating to the venue’s world class standards, but to support them with strong career progression.

“We have now experienced more than 1,000 enrollments in programs delivering industry qualifications and I look forward to seeing more great talent developed through this program.”

Minister for Tourism and Major Events, and Assistant Minister for Skills, Adam Marshall, said the innovative partnership will play an important role in helping to maintain Sydney’s reputation as one of the most desirable events destinations in the world.

“I applaud ICC Sydney and TAFE NSW for working together to create a program that raises the bar for vocational training in the business event and hospitality industries. NSW is Australia’s premier destination for major events, and having people with the right skills is vital to supporting this important driver for the local economy,” he said.

Jon Black, managing director of TAFE NSW, said the joint initiative includes the delivery of courses across eLearning, on the job training, classroom based learning and seminars.

“TAFE NSW teachers have delivered great results since this training began, meaning that ICC Sydney is set to be supported by some of the top talent in the industry. It’s also a great example of how blended learning can result in some of the best training available. This program ensures that our students can kick important professional goals and I look forward to seeing the initiative continue to thrive,” he said.

Ash Bull, a casual food and beverage employee with ICC Sydney – and their 1,000th enrollee, said the support he received at ICC Sydney was enabling him to progress his career in what is a diverse and inclusive work environment. “Since my first day, ICC Sydney has given me the tools and knowledge I’ve needed to develop new skills,” says Bull, adding, “it’s a supportive environment with a very practical approach to training, allowing me to excel and be the best team member that I can be.”

ICC Sydney’s people and its industry leading HR initiatives are already securing awards with the team picking up both the Australian HR Team of the Year and Best Recruitment Campaign at the recent Australian HR Awards.

ICC Sydney is Australia’s premier convention, exhibition and entertainment destination. The showcase international venue underpins Sydney’s place as one of the world’s most desirable meeting and major events the destinations. ICC Sydney is the epicentre of a 20-hectare transformation of Darling Harbour by the NSW Government to highlight Sydney as the first choice in Australia and the Asia Pacific region for the major events industry. A NSW Government project, ICC Sydney was delivered in partnership with Darling Harbour Live, comprising Lendlease, Hostplus, First State Super, Capella Capital, AEG Ogden and Spotless FM. ICC Sydney is operated by globally acclaimed venue manager AEG Ogden. For more info, visit iccsydney.com