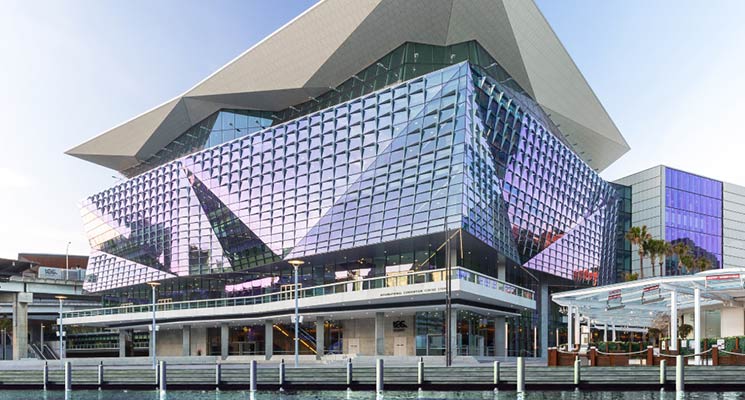 For the second consecutive year, International Convention Centre Sydney has been named Australia’s Best Conference Venue at the 2018 Qantas Business Travel Awards. The prestigious judging panel, including world-renowned chef Neil Perry, and oceanic managing director of Acer, Darren Simmons, recognized and praised the venue for its ongoing commitment to world class service and quality of delivery at the awards ceremony in July.

Geoff Donaghy, CEO of ICC Sydney, says the award acknowledged the consistent quality the team is delivering and its continued to commitment to innovation and authenticity.

“Since opening in December 2016, ICC Sydney has established programs and partnerships that allow us to deliver success for our clients while supporting the community in which we operate,” says Donaghy. “For example, our focus on fresh, local produce delivers quality meals for events while supporting local farmers and producers.”

“For ICC Sydney to win the award in its inaugural year of operation and now 12 months later is a true testament to the venue’s team and the outstanding job they have done in opening a venue and establishing industry-renowned programs and initiatives,” says Dominello. “I congratulate the entire ICC Sydney team and their commitment to delivering outcomes that benefit Sydney and New South Wales.”

ICC Sydney is Australia’s premier convention, exhibition and entertainment destination. The showcase international venue underpins Sydney’s place as one of the world’s most desirable meeting and major events destinations. ICC Sydney is the epicenter of a 20-hectare transformation of Darling Harbour by the NSW Government to highlight Sydney as the first choice in Australia and the Asia Pacific region for the major events industry. ICC Sydney is being delivered by Darling Harbour Live, comprising Lendlease, Hostplus, First State Super, Capella Capital, AEG Ogden and Spotless FM in partnership with the NSW Government.  ICC Sydney is operated by globally acclaimed venue manager AEG Ogden. For more info, visit iccsydney.com.