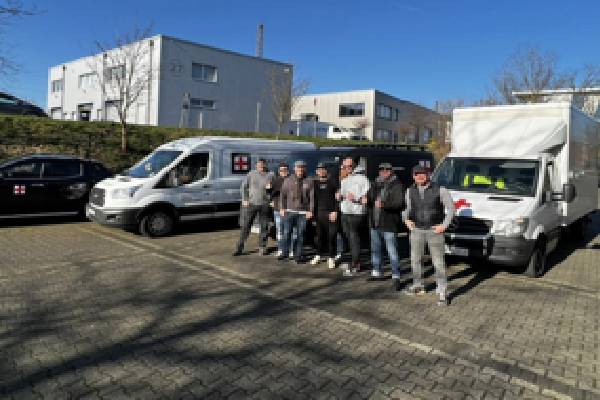 The global IFES family, the worldwide trade association dedicated to the specific needs of exposition designers and providers of tradeshow and events services, has been united in an unprecedented outpouring of support for those suffering as a result of the Russian invasion of Ukraine. Behind the scenes, individual member-driven initiatives have been collecting funds and pooling resources to deliver much needed supplies to those affected, and to transport and house people displaced by the conflict.

At the same time, Sebastian Bernat, CEO of Sound and Lights Service in Poland has been putting his company vehicles to good use, bringing refugees from the border and assisting families with accommodation in temporary hostels, hotels, and with private families able to host.

Each of his vehicles is driving around 1400 km a day, so IFES members have been contributing round-trips and fuel donations to assist with this initiative. Torsten and Sebastian have subsequently joined forces to maximize their efforts.

Lucasz Jerzmanowski Chairman at Smart Design Expo in Poland, is transporting displaced mothers and children from the border and buying food and clothes. He has opened his own home to a Ukrainian refugee family.

On a daily basis, the stories just keep rolling in. It seems that anyone close enough to offer hands-on assistance is doing so, and everyone further afield is supporting these initiatives financially.

The IFES board is humbled by our members’ humanitarian demonstration. A vast IFES help-network now stretches from Asia-Pacific to Africa, Canada, Middle East, the US and across Europe, where members are rallying to support those in the thick of the action, either financially or in person.

“Of course we are a collection of planners and project managers by trade, so co-ordination of effort is something that comes naturally, but this absolute generosity of spirit is something one does not often encounter. We celebrate this trait of the IFES community and salute the efforts that are being made by selfless people around the world to assist in this time of crisis,” says IFES President Justin Hawes. “What our people are doing is amazing. IFES stands not only for international collaboration but international fellowship as well. I’m a proud IFES member!”