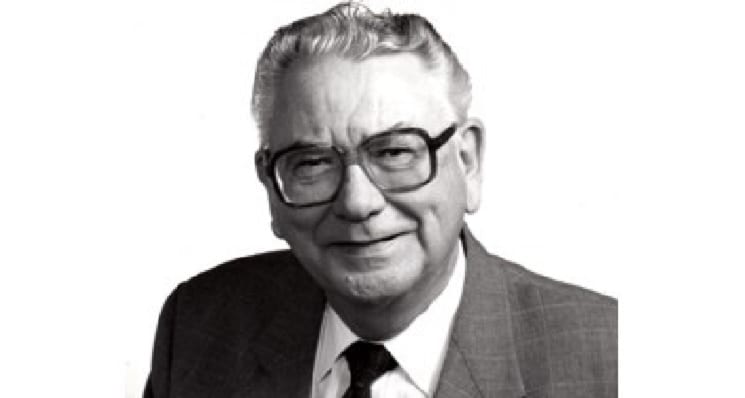 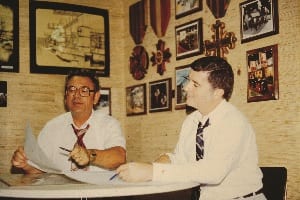 Don with 3M’s Pete Gavin in the ‘70s at Dimensional Display & Design in St. Paul, Minn.

Don Bendickson, 93, a leader in EDPA and founder of several companies including Dimensional Display & Design and Exhibit Design Systems, passed away on April 2. In addition to his 50-year career in retail display and exhibit design, he operated an art studio for nearly 70 years. He was a partner in Interlock Structures International and also worked at Custom and Rutherford Displays and Heritage Communications. In 1987, he acquired Haas Display from which he retired after 50 years in the business. A memorial and celebration of his life will be planned for later this year after difficulties from COVID-19 have passed. 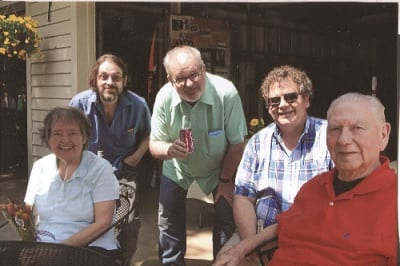 Don with (L-R) his late wife, Joan, and sons Joel, Mark and Eric

He was born in Scarville, Iowa, growing up with his sister Margaret on the farm and attending school. They were surrounded by relatives and friends in both Iowa and Minnesota celebrating their Norwegian heritage. Don served for two years in the U.S. Army during the Korean conflict. He attended Luther College in Decorah, Iowa taking every art and design course offered. He moved to Saint Paul, Minn., and started his career creating window and specialized displays for the Emporium, a St. Paul department store. It was there he met his wife Joan, of 62 years. They raised their three sons in White Bear Lake and Vadnais Heights and were members of St. Stephen Lutheran Church. Don and Joan literally made their family home—clearing the site, and as designers, custom interior fabricators and landscapers. Don was passionate about golf and art. Since retirement he shared his watercolors in community art shows.

Many industry folks shared their memories and condolences on his son Mark’s Linkedin page. Tracy Inglis, account executive at Display Arts wrote, “Mark, I am so sad for you and your family. Don defined the Twin Cities exhibit industry for me, and he left quite a legacy here. Such a good guy; always fun talking with him.” Susan Brauer, CME tradeshow and event manager and president of Brauer Consulting Group, wrote, “He was an extraodinary person for sure! Don will always hold a special place for me and Mark. Our prayers and thoughts go out to you and the family.” 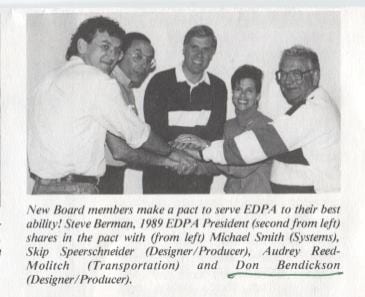 Jodi Ellsworth, purchasing manager at Exhibit Partners, wrote, “Your dad was such a great guy and I was very lucky to have met him and spent the time I did with him in my early years in the tradeshow business!” Stacey Schreyer, sales at CenterPoint Marketing, wrote, “I’m thankful for all that Don taught and shared with us in this industry. And lucky to have one of his beautiful watercolor artwork pieces to remember his passion during retirement.”

Bob Stone, director of operations at Star, wrote, “I enjoyed working with Don back in the day. Don was a good man! My thoughts and prayers are with you and your family.” Chris Griffin wrote, “My heartfelt condolences on your personal loss, Mark, and on the loss of one of our industry’s early pioneers.” Jeff Spizale, account executive at Elevate97, “Sorry Mark, I had a lot of fun working with your dad at Haas.” 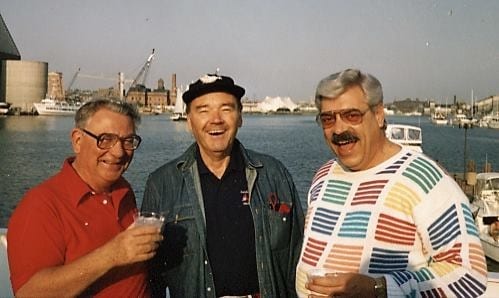 Paul Maynard wrote, “Your dad was a real influence on so many and on the larger industry. Many of us owe him a debt of gratitude for coming before us and being a trusted guide and leader.” Brett Hyams, senior solution sales executive at SmartSource powered by Abcom, wrote, “Don was a great man and good friend of my father’s. They were from a generation of pioneers in this industry.”

The son of Hilda and Melvin Bendickson, he was preceded in death by his wife, Joan, and granddaughter, Julia Rose Bendickson. He was survived by his children; Mark, Joel, Eric (Teresa); grandchildren, Justine, Graham, and Maria Bendickson; sister, Margaret Nesje, as well as several nieces, nephews, grandnieces, grandnephews, great-grandnieces and great-grandnephews. Don’s life ended at Saint Therese at St. Odilia after residing at Cerenity Senior Care in White Bear Lake and his family is grateful to those who cared for him.

In addition to Mark’s Linkedin page, friends may leave memories and photos in his online guestbook at www.bradshawfuneral.com/obituary/Donald-Bendickson. If you wish to make a donation in Don’s name the family requests donations be sent to the EDPA Foundation at www.edpa.com/edpafoundation.