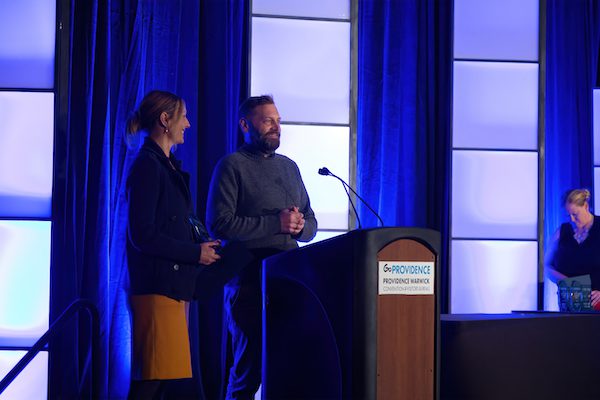 The Providence Warwick Convention & Visitors Bureau (PWCVB) convened its first Annual Meeting in more than two years Monday to honor and celebrate hospitality and tourism professionals, along with community organizations, that shone brightest during some of the industry’s darkest times. While taking a moment to reflect on more than a year and a half of unimaginable hardship, the PWCVB spent most of the evening at the Rhode Island Convention Center setting its sights on a future filled with both uncertainty and optimism.

“Issues that are important to communities as a whole – climate change, affordable housing, workforce development, public safety – are important to us too,” said Kristen Adamo, PWCVB president and CEO. “As tourism professionals, we have an imperative to do what we can to not just market Providence and Warwick, but to help sustain them. As we look to 2022, we choose not to focus on the past but to look boldly to the future with new ideas, new goals, and an enduring commitment to serving our partners and our community.”

Frog & Toad was named the organization’s “Partner of the Year” for the store’s fundraising efforts throughout the pandemic, including the Buy Local RI T-shirt campaign that raised more than $7,000 for the Rhode Island Hospitality Association’s (RIHA) Employee Relief Fund. Dan Fawcett of the Rhode Island Sports Center was honored with the RI Sports Champion Award for his influence on the region’s sports tourism industry and well-established relationships and reputation throughout the sports events community.

This year’s event featured a new award honoring the late James McCarvill, former executive director of the Rhode Island Convention Center Authority. McCarvill passed away last year and the James McCarvill Leadership Award now provides an enduring legacy and tribute to his strong leadership. Honorees included the Dunkin’ Donuts Center for its instrumental role in the state’s COVID-19 response plan, serving as a test kit assembly location and mass vaccination site, and RIHA for their lobbying efforts on behalf of restaurants and endless support to the state’s hospitality businesses.

The Rhode Island Foundation was inducted into the PWCVB’s Hall of Fame. The organization was a significant partner supporting a number of marketing campaigns, including the return of the Buy Local RI holiday campaign and subsequent T-shirt fundraising effort.

The evening also honored 18 individuals who went above and beyond for their industry and community throughout the pandemic. This year’s Hospitality Hero Award winners are: