Installation and dismantle (I&D) companies are some of the most vital suppliers to the tradeshow and exhibit industry.

For every tradeshow, there is a labor crew that laid out the show, divvied up the booth spaces, delivered the components, installed the electricity and rigged the signs.

They install and dismantle booths from the smallest portable displays to gigantic multi-level custom exhibits. Some of them also produce the exhibits in fabrication shops, then install and dismantle them onsite. Labor crews of men and women are able to create a miniature, functioning city in just a few days, then break it down and pack it up for the next destination in even less time. 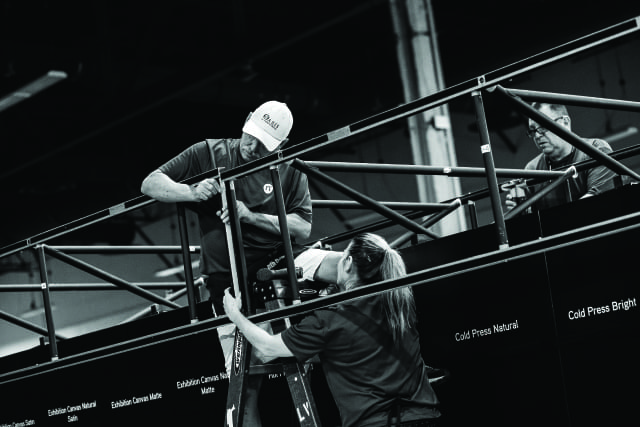 Although other countries can also boast large centers for fairs and expos, the I&D industry is distinctly American, with deep roots stemming from the historical union movement. However, the work that these men and women do is mostly unknown to the public because the workers are invisible during the events that they help create. They work until the hour the tradeshow opens, and then return to work when the show closes.

Seeing how a tradeshow can drastically stimulate the local economy within a short period of time, cities all over the world have built convention centers and are constantly improving facilities to attract show managers and visitors. Tradeshows continually prove to be a valuable marketing channel for all industries as meeting customers face-to-face is the age-old way of trading.

And as the exhibiting market grows, so do the complexity, demands and expectations. Evolving from the temporary wooden structures held together by wing-nuts, tradeshow exhibits today represent a business’ “traveling office” and is complete with carpet, electricity, custom furniture, cool lighting, refrigerators, TVs, monitors and a fleet of people to make it happen. With competitors facing each other across the aisle, a tradeshow floor can seem like an arms race. And every player makes an appearance, lest their competition takes advantage of their absence.

The exhibitors responsible for planning their company’s tradeshow program are entrusted not only with huge budgets, but also with the full weight of expectations from management and coworkers that their event is a success. They are under intense pressure to pull off perfection in a medium where – as is the case for anything that’s live – anything can go wrong.

Yet despite the fact that tradeshows have become more complex, there are fewer tradeshow managers today than 20 years ago. In 2015, the average tradeshow manager may be the time-strapped marketing director who is responsible for several other marketing initiatives and does not fully understand how tradeshows operate. Or she may be the young marketing coordinator who is in her 20s and just learning the ropes. Then there’s the international exhibitor who is surprised and overwhelmed by the complexity and costliness of exhibiting in the U.S.

Yet few exhibitors understand the installation and dismantle business. It is often misunderstood and thought of as a commodity or an economic service, which has no qualitative differentiation across a market. Referring to a commodity good, the saying goes, “From the taste of wheat, it is not possible to tell who produced it, a Russian serf, a French peasant or an English capitalist.” In relation to I&D labor, exhibitors regard I&D labor services as nearly equal with no regard to the people who produce the work.

Whether time-strapped or inexperienced, a tradeshow entails too much for the already overworked exhibitor to manage or know. With I&D labor rarely seen or even considered until the show, there are many misconceptions about labor. For example, that tradeshow labor is all the same. Or that it’s just an assembly of pieces. Yet these are the workers that exhibitors entrust with their company’s properties worth thousands of dollars. They trust that these properties will arrive at a distant location, and that an onsite crew that they never meet will make it all come together on the show floor within a few days.

The I&D crews who put it all together also face extreme challenges. Sometimes properties show up late, and when they do arrive, they’re damaged, in need of repairs or missing pieces. Unfinished exhibit properties arrive and the labor crew must finish them onsite. The drawings may be inaccurate or incomplete. And despite all the complications, the I&D crew is given no extra time to complete the assembly.

Exhibitors need to understand I&D and to know who’s on their crew. From labor readily available from general contractors who partner directly with show managers and associations, to boutique labor companies that are part of the exhibitor-appointed contractor segment, quality labor service is critical.

The best I&D companies have the best people, training, processes and equipment to provide exemplary levels of service. Besides the basic installation skills, the I&D team needs organizational skill, tools of the trade, specialized training in systems, interpersonal skills, and safe and efficient work practices.

In this special I&D series, we will explore the I&D industry to help readers understand the business and attempt to dispel misconceptions. This series was made possible by the contributions of several experts in the field, who were willing to volunteer their time and materials to Exhibit City News.