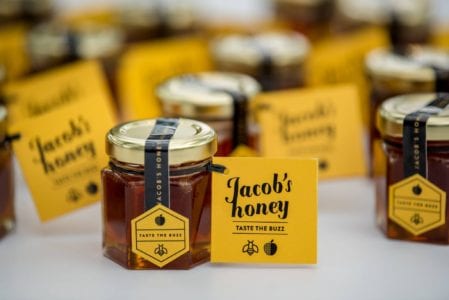 New York Convention Center Operating Corporation President and CEO Alan Steel and Centerplate President and CEO Chris Verros today announced a new salad dressing at the Javits Center’s Taste NY Bistro featuring honey harvested from bee hives housed on the building’s green roof. The honey-infused vinaigrette, along with other New York homegrown ingredients, is featured in a new salad offered at the cafe-style location inside the convention center on Manhattan’s West Side. Launched by Governor Andrew M. Cuomo in 2013, Taste NY is a statewide initiative designed to promote New York’s food and beverage industries at major tourist destinations and routes.

The homegrown honey, known as Jacob’s Honey, was extracted last month by a team of Javits Center engineers, in 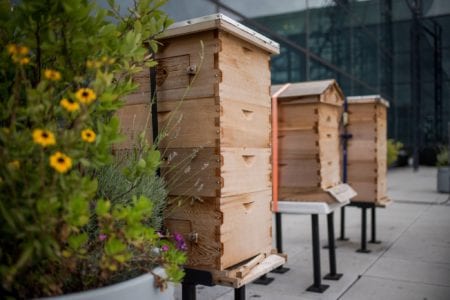 partnership with local beekeeping organization, nyc.beekeeping.org. The first batch was harvested from three wooden hives, which were installed on the 6.75-acre green roof earlier this year. The hives are part of the award-winning sustainability program at the Javits Center that has reduced energy consumption throughout the building while transforming it into a wildlife sanctuary.

“The success of our sustainability program epitomizes our rebirth as an organization, and this first batch of honey illustrates how far we have come in our efforts to reduce energy, create a wildlife haven and improve the quality of life in our neighborhood,” said Steel of NYCCOCP. “The Javits Center has always been a hub of activity, and thanks to the work of our staff and our business partners, we are busier than ever before. Today, we are supporting New York’s economy and its environment, and we are proud to offer this new salad dressing at our Taste NY Bistro location so everyone can now enjoy the sweetest part about us.”

“We are committed to delivering one-of-a-kind, locally relevant hospitality programs for each community we serve, and we’ve taken our commitment for sourcing to a whole new level with the Javits Center’s rooftop apiaries,” says Verros of Centerplate, the Javits Center’s exclusive caterer and hospitality partner. “The Javits Center has become a model of sustainability for event facilities nationwide, and we are proud to partner with them as we offer an assortment of food and beverages from a variety of New York producers – including this New York icon.”

“Taste NY is proud to provide an outlet to not just feed consumers delicious agricultural products, but to also help educate them about the incredible work that the Javits Center is doing to promote pollinator health and awareness and expand wildlife habitats in the City,” said State Agriculture Commissioner Richard A. Ball. “This is such an exciting project that exemplifies the smart, sustainable upgrades to the Javits Center over the years and showcases the many possibilities of urban agriculture.” 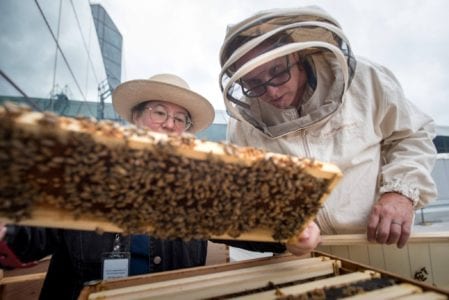 In April, Javits Center Chief Engineer Rick Brown and a team of carpenters and engineers worked with local bee expert Liane Newton of nycbeekeeping.org to install three bee hives on the south side of the green roof, and since then, employees have received training on how to care for the hives and ensure their growth. Over the past several weeks, more than 10 frames have been removed from the hives, and honey was extracted in the convention center’s main kitchen operated by Centerplate. More than 250 ounces of honey were produced and bottled, and Centerplate Executive Chef Bill Miller created a new salad dressing called – Jacob’s Honey Vinaigrette – made with the rooftop honey. A salad featuring the dressing is now being sold at the Javits Center’s Taste NY Bistro on the second level of the convention center.

The production of natural honey is the latest development in the Javits Center’s sustainability program, which was formed as the building underwent a major renovation from 2009 to 2014 that included several sustainable upgrades and LEED Silver certification from the U.S. Green Building Council. Led by the New York Convention Center Development Corporation and Empire State Development, the $463 million renovation included the installation of more than 6,000 bird-friendly, translucent glass panels, more than 100 energy-efficient HVAC units and the massive green roof, which is comprised of sedum pla 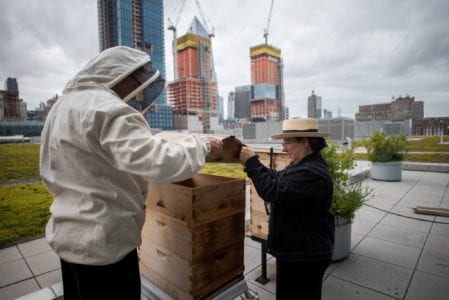 nts and serves as a home to 26 bird species and five bat species. In order to study the environmental impact of the green roof, the Javits Center has since partnered with the New York City Audubon, The Cooper Union, Drexel University and Fordham University.

In the coming years, the green roof will increase in size as a major expansion of the Javits Center moves forward. Announced by Gov. Cuomo in 2016, this expansion project will create 500,000 square feet of contiguous exhibit space and five times more meeting room space, including a state-of-the-art ballroom and a rooftop terrace overlooking the Hudson River. An on-site truck garage will be constructed in order to house all event-related trucks, increase operational efficiency and improve area traffic flow and pedestrian safety.