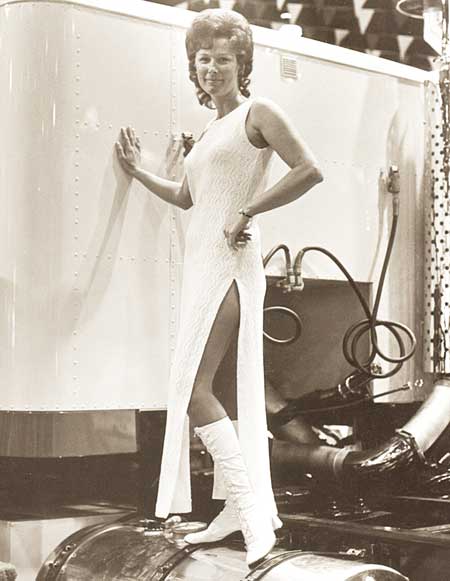 In 1971, the landmark television sitcom All In The Family, starring Carroll O’Connor as Archie Bunker, debuted on CBS, Apollo 14 landed on the Moon, Walt Disney World opened in Orlando, Fla. and Judy Venn and Associates (JVA) began providing talent to the world of tradeshows and conventions.


Over the years, JVA has provided everything from booth babes to sommeliers, representing some of the nation’s leading companies at conventions.
Venn started her career as a model at a time when most exhibitors selected booth staff for their looks more so than for their personality or knowledge of a product.
It wasn’t long before Venn discovered she had more to offer than just her appearance.
“I was working a convention and as always, I went above and beyond what was asked of me,” said Venn. “I took it upon myself to learn as much about the product that I could and kept the booth clean and tidy. The client and his sales staff were so impressed they suggested I start my own agency. I went home that night and spoke to my husband and we prayed about it and here we are 40 years later.”
With offices throughout the country, JVA has been busy during the last 40 years building a nationwide network of more than 4,000 convention personnel, which includes hosts and hostesses, narrators and demonstrators, sales associates, interpreters and specialty talent.
At her first show as the preferred talent provider, Venn learned the value of being able to provide clients with a wide range of options.
“Actually, there were two shows in Anaheim, the California Dental Association show (CDA) and the International Trucking Show (ITS),” recalled Venn. “CDA exhibitors were requesting professional and intelligent hostesses and ITS trucking was looking for booth babes. I learned that each show was different in their needs and wants and that you can not treat all shows the same. It was a lot of work, as I had to deal with various personalities, but all in all, it was very enjoyable and I learned a lot from my first two shows.”
As a 40 year veteran of the industry, Venn has also seen her fair share of changes.
“As far as Associations go, it used to be that a verbal or handshake was all you needed to be the preferred talent provider,” said Venn. ”In the past 20 or so years, everything has been by contracts, so much for the good ol’ days.”
Venn has also seen parts of the industry mature, as an old way of doing something evolves into a much better industry standard.
“We are finally seeing that most exhibitors are looking for (a professional) type of talent to represent them,” said Venn. “Having said that, you will always find a few hold outs for ‘booth babes.’”
Over the years, JVA has done its part to promote this change.
“I have tried to educate the exhibitor on how to use booth talent to their best advantage,” said Venn. “You can always find attractive or pretty talent, but it should go much further with personality, warmth, intelligence, integrity and a team player attitude.”
Today, JVA works with some of the giants in the industry, like the International CES and its 149,000 attendees and 2,800 exhibitors. They also represent some of the major exhibiting companies in the U.S. ranging from Panasonic to Del Monte.
For her 40 years in the industry, Venn remembers most of it like it was yesterday, including one moment that she is able to laugh about nowadays.
Venn was doing a presentation for Chevrolet Motors and it just so happened to be Sports Night.
“I was to introduce the different baseball stars, and not being knowledgeable on baseball, I thought I would try word association,” recalled Venn. “When it was time to introduce Frank Tanana, who pitched in the majors for 20 years, I introduced him as Frank Banana. The crowd started laughing and I found out that baseball players don’t have a sense of humor. Ever since that night I have not used word association.”
Baseball players aside, there is not a thing Venn would change about her tradeshow career.
“It has been very memorable,” said Venn. “The friendships I have made over the past 40 years have been life long and the experience of serving such a great industry has been very rewarding. I can honestly say that I have been blessed!”
As for the future, Venn has no doubts that her company will continue to thrive because it will be in good hands.
“I am sure that in a few years I will be stepping down and having my daughter Donna  take over,” said Venn. “She has been president and handling JVA for the past 25 years, and we look forward to serving our clients for many more years to come.”