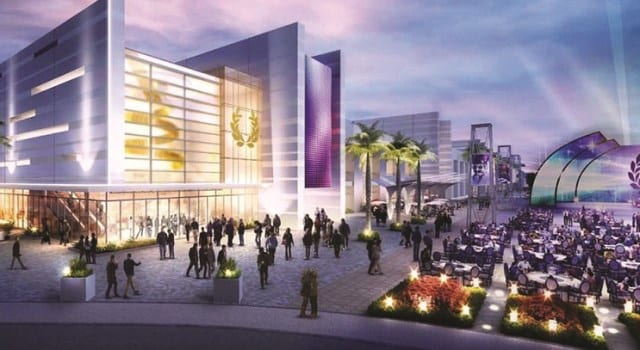 Location: Winchester, NV (one block east of The Las Vegas Strip, on the site of the Las Vegas Park Speedway, a failed horse and automobile racing facility from the early 1950s)

Renovations & Expansions: Currently undergoing an $860 million expansion adding 500,000 sq.ft. to be completed by 2021, the 14th in its history. In 1971, $7 million went to rebuild, remodel and expand; 1998’s expansion increased the center to 1,900,000 sq.ft. and they imploded the closed Landmark Hotel and Casino to add parking; in 2002 they built South Hall, adding 1,300,000 sq ft., and four bridges to cross over Desert Inn Road; in 2010 they added a Metropolitan Police Substation and a Clark County Fire Station (becoming the only facility in the country with these on-site amenities at the time) and in 2015 they spent $182.5 million to buy the Rivieria Hotel and Casino (which they imploded in 2016).

Ranking: 3rd largest convention center in the U.S. (after Chicago and Orlando)

First Show: The World Congress of Flight in 1959.

Fun Fact: The LVCC hosted two sold-out shows of the Beatles on Aug. 20, 1964; several major professional boxing fights, including Gene Fullmer v. Sugar Ray Robinson on March 4, 1961; Sonny Liston v. Floyd Patterson on July 22, 1963; and Cassius Clay (Muhammad Ali) v. Floyd Patterson on Nov. 22, 1965; and two Billy Graham Crusades between 1978-1980. It was also home to the UNLV Runnin’ Rebels men’s basketball team from 1966-1982; when the arena was demolished in 1990, it became one of the largest single-level convention center facilities in the world.

Fun Fact #3: The LVCVA promotes the use of alternate energy and currently 90 percent of its vehicles are being powered by electric or propane. With a generous grant from the Consumer Electronic Association, the LVCC unveiled its Electronic Vehicle Charging Station during the 2014 International CES.

Operations: It is owned and operated by the Las Vegas Convention and Visitors Authority. The LVCVA board includes elected officials and six representatives from the private sector. Clark County and the city of Las Vegas each have two

representatives, while the cities of North Las Vegas, Henderson, Mesquite and Boulder City each have one seat. Private-sector members, nominated by the Las Vegas Chamber of Commerce and Nevada Resort Association, represent the hotel industry and general business interests. The LVCVA board is considered to be one of the most successful public-private partnerships in the country.

At the end of 2010, the Las Vegas Valley had more than 10,000,000 sq.ft. of exhibit space. And it’s only grown larger and larger since then—not only has the Aria Hotel & Casino added to their previous 300,000 sq.ft. convention space by opening a 200,000 sq.ft. convention center space this month (where the old theater showing “Viva Elvis” used to be) but the LVCC is adding another 600,000 sq.ft. in their current expansion phase to be completed by December 2020.

Our Las Vegas Convention Center Spotlight just wouldn’t be complete without highlighting a few more convention spaces in the city–most of which are less than a three miles from the LVCC. After all, the Sands Expo CC/Venetian Meetings is the fifth largest convention center in the U.S. (after Chicago, Orlando, LVCC, and the Georgia World Congress Center) and is a little more than a mile from the LVCC and Mandalay Bay’s CC is the tenth largest in the country. Space constraints won’t permit us to feature many of the beautiful meeting spaces in Las Vegas—from the Station Casinos (such as Red Rock, Green Valley, Palms, Aliante, Sunset Station, Sante Fe Station, Texas Station, Boulder Station, Fiesta and more) to the JW Marriott/Rampart Casino to the South Point (with 151,000 sq.ft.) and the M Resort.

But even if we stick to the Strip, we can only do the top (largest) four – which leaves out Steve Wynn’s beautiful Wynn and Encore resorts (with 260,000 sq.ft. of meeting space), MGM Resorts International’s Bellagio (with 100.000 sq.ft. of meeting space), Mirage, Luxor, New York-New York, Excalibur, The Park/NoMad (formerly Monte Carlo) and Circus Circus; Caesars Entertainment’s Paris, Bally’s, Flamingo, Planet Hollywood, The Cromwell, The Rio, and Harrah’s; Boyd Gaming’s Sam’s Town, Main Street Station, Orleans, Suncoast, Gold Coast, Aliante, Cannery, Eastside Cannery, California, Fremont; etc., etc., the list just seems endless! But even so, we will miss The Cashman Center which opened in 1983 as the “hometown” conference center, a 483,000 sq ft complex on a 55 acres site. Operated by the LVCVA until 2017 when it was turned over to the city of Las Vegas (and promptly closed) it included Cashman Field and a 100,000 sq ft convention center. The minor league ball team will be moving to Downtown Summerlin next year and the Harvest Crafts Fair, the Bridal Shows, and the local school functions will all have to find new (and hopefully inexpensive) homes.

Date Opened: 1990 (at the time it was the second largest convention center in the U.S.—it’s now fifth)

Fun Fact: in 1990, it was the only privately owned and operated convention center in the U.S.

Date Opened: 2003 (at the time it was the fifth largest convention center in the U.S.—it’s now tenth)

Fun Fact: Although its convention square footage of 1.7 million square feet ranks it behind the LVCC, Mandalay Bay offers more meeting capacity (75,994) and banquet capacity (38,885) than any other facility in Las Vegas.

Fun Fact: When the MGM Grand’s extension is completed in late 2018, MGM Resorts will have invested $350 million over four years to expand its meeting and convention space on the Strip by a quarter to more than four million square feet. MGM Resorts finished a 350,000 square foot expansion of the Mandalay Bay Convention Center last year and opened a 200,000-square-foot expansion of the Aria in February this year.

Address: Will be built in the parking lot behind The Linq and the High Roller, stretching toward Koval Lane

Date Opened: Caesars Forum will be breaking ground this year for 2020 debut

Fun Fact: Pitched as hosting the “two largest pillarless ballrooms” in North America, a walkway over Linq Lane will connect guests to the retail and restaurants at The Linq Promenade, and a covered sky bridge will let conventioneers quickly travel directly to Harrah’s, The Linq Hotel, and the Monorail. Featuring a glass design, the space will place a special emphasis on “natural light” and a “neutral pallet” to enable temporary branding opportunities.