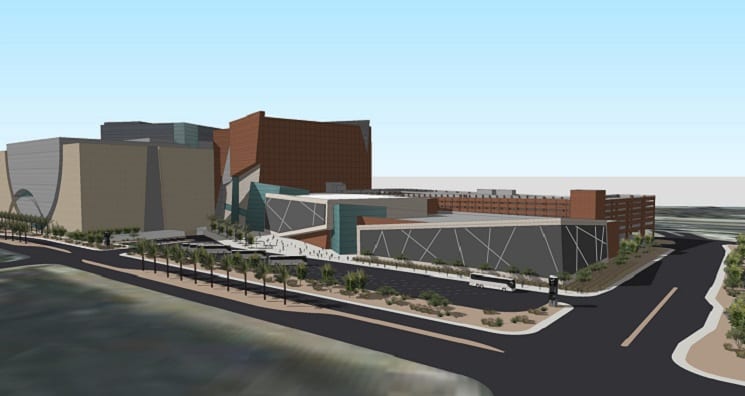 The new Expo Center will provide state-of-the-art exhibition and meeting space in the downtown area for corporate and private events, meetings and tradeshows, as well as service the Las Vegas Market furniture, gift and home décor trade events that attract roughly 100,000 attendees annually.

The cost of the Expo Center will be approximately $76 million of which the City of Las Vegas will contribute $30 million through a TIF (tax increment financing) note. Construction is slated to begin in the next 12-18 months and will take approximately 18 months to complete. The new Expo Center design, which will be architecturally consistent with and connected to several of the existing structures, is in the final stages of design. The plans include exposition space, ample meeting/office space, and allocation of space for all back-of-house and administrative functions needed to run larger scale conventions and trade shows.

“I am beyond thrilled that a new expo center is under development in downtown Las Vegas,” says Las Vegas Mayor Carolyn G. Goodman. “This will create new jobs and bring even more people to our community. Construction can’t happen soon enough!”

As the Expo Center reaches peak occupancy, it is expected to have significant impact on Downtown Las Vegas and the Southern Nevada economy. The estimated spending within downtown equates to $97 million in annual visitor spending, $28 million in annual salaries and wages, and 666 recurring employment opportunities. On a broader scale, the estimated annual economic impact on Southern Nevada is $234 million in total economic output, $66 million in total salaries and wages, and 1,600 jobs (direct, indirect, and induced).  Overall, convention attendees of the new facility are expected to command in excess of 380,000 room nights in Southern Nevada, of which an estimated 161,000 would be within the downtown area.

“This new Expo Center will address demand for modern convention, tradeshow and meeting space that is currently limited in the downtown area, particularly following the closing of the Cashman Center’s facility,” says Maricich.

Currently, there is approximately 200,000 square feet of available conference and temporary exhibition space in downtown Las Vegas in several locations, but the largest single venue can only accommodate 30-40,000 square feet. This limits Downtown Las Vegas from attracting larger scale conventions, tradeshows and events, which in turn can attract substantial attendees who will benefit nearby hotels, restaurants, casinos and other businesses.

International Market Centers was acquired by Blackstone and Fireside Investments in September 2017. Tyler Henritze, senior managing director and head of U.S. acquisitions at Blackstone, says, “This investment demonstrates our long-term commitment to IMC’s home furnishings and gift business and this important expansion will allow for the pursuit of new business opportunities on their Las Vegas campus.”