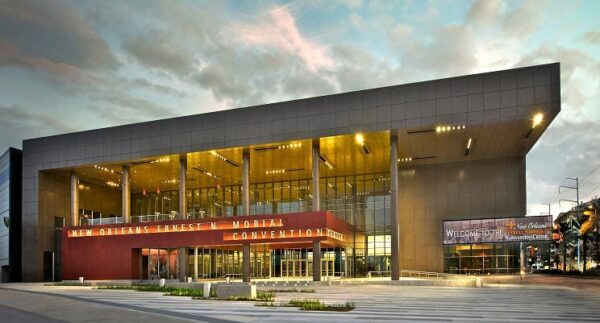 If there’s anything New Orleans likes more than music, it’s food, but a true local would have a hard time separating the two. Everyone has their favorites, and there are several not far from the convention center. Just across the street is Mulates, the Original Cajun Restaurant, 201 Julia St., one of the premiere Cajun dine and dance halls. It features live Cajun music and dancing along with great Cajun food seven days a week. Emeril’s New Orleans, 800 Tchoupitoulas St., is four blocks up the street. It is Emeril Lagasse’s flagship restaurant built in a renovated pharmacy warehouse and famed for its contemporary New Orleans cuisine. It has earned rave reviews and accolades for nearly 25 years, including Esquire magazine’s “Restaurant of the Year” and Wine Spectator’s “Grand Award” every year since 2000. Despite its celebrity chef roots, it offers great service in a festive, unpretentious setting. For more of a laid back, down home breakfast or lunch, there is Two Chicks Cafe, 901 Convention Center Blvd #109. The café is owned and operated by two friends with a passion for food and a love for New Orleans. Everything is handcrafted by the Two Chicks, including fresh squeezed juices, smoothies, breakfast, artisan sandwiches and salads.

There are many well-known hotel chains within walking distance of The MCCNO with a range of amenities and price ranges, but for a more unique New Orleans experience there are places like The Blake Hotel, adjacent to Lafayette Square, with on-property dining at Café at the Square. For a hotel that looks exactly like a postcard of New Orleans, The Royal Sonesta New Orleans, 300 Bourbon St., offers a cobbled, plant-lined courtyard, a saltwater pool and wrought iron balcony railings. There is also a 6,000-piece art collection right in the heart of Bourbon Street. For those looking for that same quaint, New Orleans charm, but without being surrounded by the joyful madness of Bourbon Street, there is Soniat House. The hotel is small, high end and quiet, while still just a leisurely stroll to more exuberant parts of the French Quarter.

The Big Easy is a place that celebrates play in ways that few other cities can hold a candle to. Did we mention the French Quarter and Bourbon Street? Jazz clubs, Cajun dining, seafood and a wide array of oddities abound there. There is a Mardi Gras Museum, a Museum of Jazz and a New Orleans Historic Voodoo Museum. For those interested in a more practical application of voodoo, there are many shops that can sell you the tools, including Marie Laveau’s House Of Voodoo, 739 Bourbon St. The city is also home to one of the country’s classic zoos, The Audubon Zoo. To no one’s surprise, there’s a song about it. There are several live theaters in the town, including a cluster of vintage theaters near Canal and Rampart Streets. A visitor can walk between Joy Theater, Saenger Theatre and the Orpheum Theater in minutes and see their beautiful architecture. The city is a treasure trove for visitors with an eye for unique and historical architecture and the joyful spirit of the city. It isn’t really a challenge to jump in with both feet and “let the good times roll,” or, as the locals say, “Laissez les bons temps rouler!”