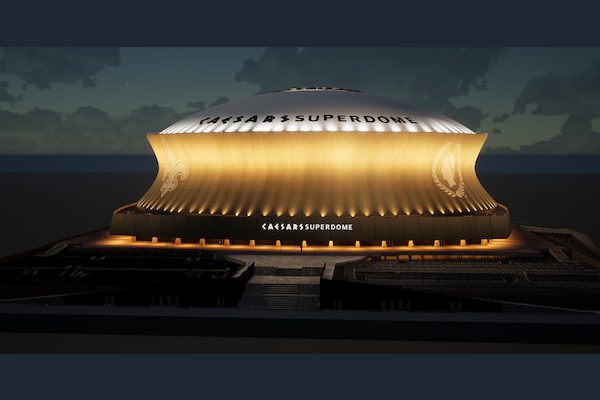 The New Orleans Saints and Caesars Entertainment has announced the formation of a 20-year, exclusive naming-rights partnership that rebrands New Orleans’ iconic downtown stadium as the Caesars Superdome.

Caesars Superdome will host all Saints home football games and Super Bowl LIX, to be played in February 2025. The building will also host the 2022 NCAA Men’s Final Four, the annual Sugar Bowl and College Football Playoff contests, a variety of concerts and hundreds of other annual events including Essence Festival, the Bayou Classic football game between Grambling State and Southern University, the New Orleans Bowl and the Louisiana State High School Athletic Association Football Championships. 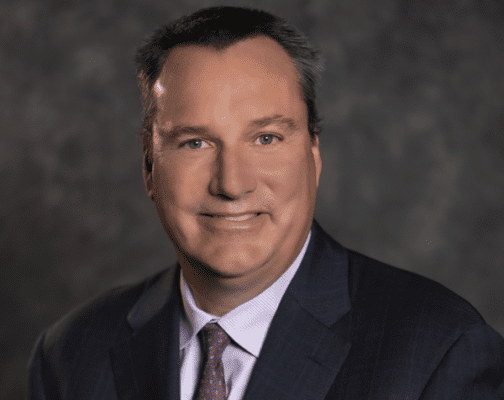 “All of us at Caesars are proud to be part of New Orleans’ vibrant culture. We understand that the Caesars Superdome is more than an iconic venue, it’s the symbol of a resilient and innovative community,” says Tom Reeg (pictured left), CEO of Caesars Entertainment. “We’ve had a strong relationship with the New Orleans Saints for nearly two decades, and we are thrilled with the opportunity to strengthen it and celebrate our commitment to the city, the state and the entire Gulf Coast region.”

In the last five years, Caesars Entertainment has led with its heart in the Pelican State, giving more than $30 million directly into community non-profits and services.  Through a combination of volunteer hours, grants from the Caesars Foundation and donations supporting local non-profit programs dedicated to disadvantaged populations, tourism and infrastructure, Caesars remains committed to the state of Louisiana and its residents.

Caesars Superdome will stand as testament to Caesars’ commitment to the New Orleans Saints and to the city of New Orleans as it embarks on a $325 million renovation to transform Harrah’s New Orleans into Caesars New Orleans. 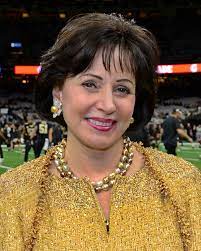 “This partnership sends a strong message about the positive future for the New Orleans Saints, Caesars Entertainment and the entire state of Louisiana,” says Saints owner Gayle Benson (pictured right). “That message states that companies with the global reach of Caesars Entertainment are investing in our city, state and region. Caesars has long been one of the world’s most respected entertainment companies. Caesars is in the midst of creating a first-class multi-million dollar entertainment facility in downtown New Orleans. This significant investment also demonstrates the strength of their commitment to our state and region. We are proud to partner with a company that is dedicated to the economic growth of our city, state and region.”

The agreement between the Saints and Caesars Entertainment represents a union between two iconic companies and brands that are built on creating economic growth in their communities. Both are engaged in spearheading expansive projects, which will help spur significant economic growth for the state of Louisiana and the entire region. 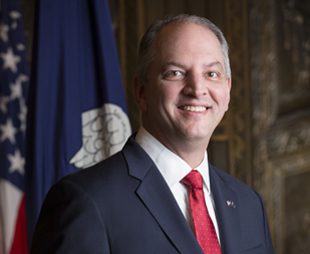 “Having faced a very trying 2020 with the COVID-19 pandemic, this is wonderful news to see that two iconic brands like the Saints and Caesars are partnering on a long-term business deal that will not only benefit New Orleans, but the entire state,” says Louisiana Governor John Bel Edwards (pictured left). “I congratulate Mrs. Benson and her team on securing this partnership. Caesars Superdome is an iconic building, globally recognized, and I am certain that Caesars will be very pleased having their name on the building that will be hosting future Super Bowls, Final Fours and Essence Festivals, to name a few.” “In addition to being one of the world’s premier entertainment operators, the investment Caesars Entertainment is making into its downtown property that is being transformed into Caesars New Orleans will create an impact that will be felt throughout our entire state and region for many years,” says Saints President Dennis Lauscha (pictured right). “Caesars is a great partner for the Saints and the region, as they are investing $325 million into their downtown facility, while at the same time, significant work and investment is being made into making our playing facility state-of-the-art not only for Saints football, but for multiple major events that benefit the entire community. In 2009, when the Saints and state reached their new agreement, the team took on the responsibility of selling the naming rights to the Caesars Superdome; a model that has resulted in no lease generated general fund requests from the state. The team has brought two iconic global brands in Mercedes-Benz and now Caesars Entertainment to this state-owned building. This agreement represents a tremendous opportunity for the New Orleans Saints franchise and further entrenches Caesars Entertainment as one of the region’s leading and dedicated corporate citizens.” 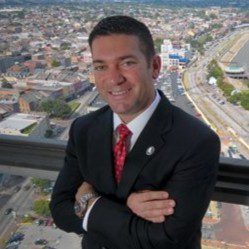 “The partnership between the Superdome and Caesars Entertainment represents a powerful combination of two legendary entertainment brands,” says Michael Hecht (pictured right), president & CEO of Greater New Orleans, Inc. “The Superdome contributes close to $600 million in annual economic impact to the state of Louisiana, and Caesars is the largest gaming company in America. Together, they will ensure that our iconic stadium drives even more jobs, tax revenue and global brand awareness for New Orleans and Louisiana. The fact that Caesars Superdome is so integral to the culture of New Orleans, and that Caesars is well-known as a community-oriented company, makes this partnership that much more compelling and promising for our collective future.”

Caesars Superdome, in a partnership between the Saints, the State of Louisiana and the Superdome Commission, is currently undergoing a $450 million renovation that is positioning the stadium to remain one of the world’s premier spectator sports and entertainment venues. Prior to the most recent renovation, the facility had seen more than $350 million in improvements in the last 12 years. This most recent project will enhance the quality of experience for the spectator at all levels, with the addition of field level suites, improved concessions and vertical spaces, which improve the environment and amenities and ingress and egress, as well as operational upgrades crucial to event operation. This renovation, which is expected to be completed by Super Bowl LIX, will help the Caesars Superdome retain its place in the pantheon of sporting facilities, having hosted seven Super Bowls (the most of any facility), the most recent, Super Bowl XLVII, which propelled $480 million in spending in New Orleans and approximately $262.8 million in direct spending by visitors. The last Super Bowl played in New Orleans also helped inspire an estimated $1.2 billion in public and private improvements to the city. The facility has also hosted five NCAA men’s basketball Final Fours, three BCS College Football Championship games, the 2019 College Football Playoff National Championship game and three NCAA College Football Playoff semifinal contests.

Edwards adds, “The Superdome is currently undergoing a much needed state-of-the-art renovation, an investment that will prove to be a benefit for many years to come. I am thankful to the board of the Louisiana Stadium and Exposition District, and specifically its chairman Kyle France, for the hard work on this critical investment in a state facility. I am pleased that the Saints, who may only use the building a dozen times in a year, are contributing $150 million of the $450 million and it should be noted that the building hosts hundreds of events annually…so everyone that uses the building will benefit.” 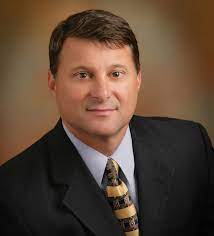 “In 2009, the state, in its new lease agreement with the Saints, gave the team the right to sell naming rights to the Superdome, thereby eliminating state subsidies to the team,” says Senator Page Cortez (pictured left), president of the Louisiana Senate. “Today, we are thrilled with the announcement of a 20-year deal between the team and Caesars. In 2011, the state approved Mercedes-Benz as the naming rights partner for the Superdome, that 10-year partnership presented to the state by the Saints. What is important to note here is that the team is working to create its own revenue sources for New Orleans and the Superdome. That is very important in our deal with the team. It is a good business deal for the state.”

The New Orleans Saints and Gayle Benson have pledged all proceeds from this partnership will go directly back into the building to help with ongoing and continued renovations, which include enhanced and expanded concourses, vertical transportation systems and on-field high-end hospitality luxury suites.

This naming rights partnership for the Caesars Superdome is a perfect fit with the corporation’s burgeoning local investment. Caesars Entertainment, the parent company of Harrah’s New Orleans, is currently in the midst of a $325 million renovation and construction project to transform the property, the only land-based casino in Louisiana into Caesars New Orleans. The project will create a flagship resort steps from the French Quarter, including an all-new 340 room hotel tower and new culinary and hospitality offerings within the casino, putting hundreds of people to work on the project, and creating more than 500 sustainable, long-term jobs. Caesars Entertainment is the largest gaming company in the United States, holding more than 50 first-class gaming facilities worldwide.

Lauscha adds, “We want to acknowledge the Oak View Group, for their tireless work in helping us build a naming rights strategy. Their partnership was a win-win for us.”

“This partnership is a long-term business investment in the city of New Orleans, but the entire state can benefit from having Caesars and the Saints partner in this naming rights deal,” says Representative Clay Schexnayder (pictured right), speaker of the House of Representatives. “It is wonderful to see this deal take place after we have all had to deal with a terrible pandemic and hopefully this is a signal that commerce is coming back.”

Caesars Superdome has housed the Saints since 1975. The naming rights agreement includes the opportunity for Caesars Entertainment branding on the exterior of the facility, as well as stadium signage and other unique displays inside the stadium.

The largest casino-entertainment company in the U.S., Caesars Entertainment, Inc. offers meeting and event planners one dedicated team, united nationwide, committed to providing the most successful meeting experiences possible. With one call or email, planners have access to more than 50 properties, with more than 2.1 million square feet of meeting space and more than 50,000 guest rooms. Mix and match properties and venues within a destination under a single contract and minimum. Enjoy elite perks, rewards and privileges with our Caesars Rewards Meeting Diamond Program. For more info, visit www.CaesarsMeansBusiness.com and www.CAESARSFORUM.com.