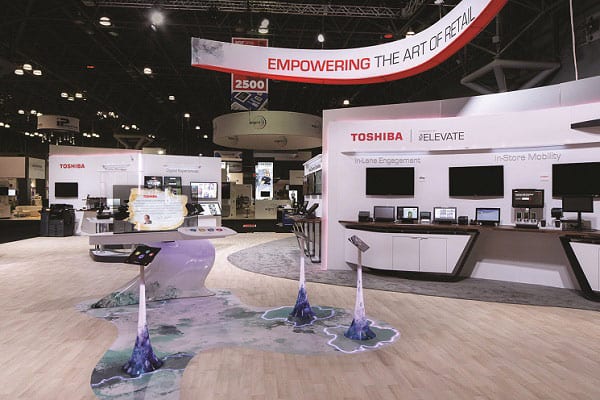 Pictured above: “Empowering the Art of Retail” was the theme for Toshiba Global Commerce Solutions at NRF 2019. The iPad stands in the middle were printed on a 3-D printer. The “splashes” of paint around them were made to look like paint had dripped from the large LED light structure hanging from the ceiling.

Once upon a time, a discussion about exhibit design trends revolved around physical elements such as Pantone colors, furniture styles and LED displays, with pundits opining about what cool ideas would be rocking the show floor in months to come. The end game for everyone in the exhibit hall was to get bodies into a booth so you could scan their badge and add them to a big pile of leads. But the conversation about design has shifted, industry leaders say, because the very purpose of tradeshows themselves has shifted, and using a show primarily to collect leads has become as outdated as Pantone Radiant Orchid and VCRs. 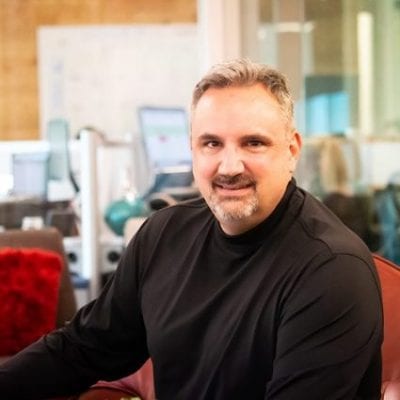 In years past, most booth spaces were designed with the main objective of generating leads and the secondary goal of reinforcing brand identity, says Scott Miraglia (pictured left), president of Elevation Marketing. To that end, much emphasis was placed on designing for a “wow” factor that would get an exhibit noticed from the aisle and create some kind of impression about the brand. That mentality was at the forefront because people coming to the show floor often had little information about exhibiting companies and were in the earliest stages of their buyer’s journey, Miraglia explains.

And then came millennials and the Internet.

“The whole tradeshow industry has dramatically changed in the last five years,” Miraglia says. “Now, the buyer’s journey starts digitally. Attendees begin their search online and are deciding before a show who they want to talk to, and that didn’t happen 10 years ago. It has changed the show floor significantly because they are using tradeshows for different purposes today – they already have a short list and they are coming to hold meetings and close deals.”

That shift, Miraglia says, should inspire exhibit designers to look at a space through an entirely different lens. “The question today is where a tradeshow fits in the buyer’s journey,” he says. “That is how we need to be designing exhibits.” 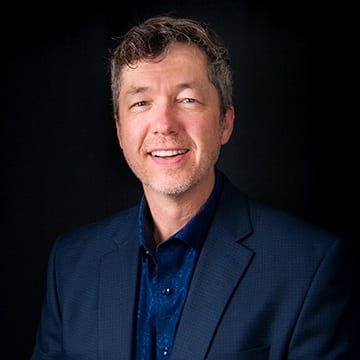 Rob Majerowski (pictured right), the general manager of the Chicago division of Exhibitus, agrees. “Ten years ago, it was about big, flashy pieces of architecture,” he says. “Now it is about strategy and what you want to accomplish on the show floor. You still need some focus on architecture, but it’s about a lot more. Tradeshow venues are for storytelling, and really everything needs to start with that story and then design the colors and space around it.”

If there is a trend in architecture, Majerowski says, it is to provide as many different types of spaces as possible within a booth to facilitate communication. “In the past, maybe there was a private conference room and that was all,” he says. “Now there are so many different touchpoints designed to accommodate a variety of conversations happening in an exhibit space.”

As part of that shift, Miraglia says, many companies are moving away from off-site meeting spaces such as hotel or conference rooms and instead courting attendees to meetings right on the show floor. As such, he says, thought needs to go into how a space can facilitate communication. “A lot more design elements are centering on human interaction,” he says. “It’s really changing the way we approach an exhibit’s design. How do we create a more inviting space to have those conversations?” Hand in hand with that, he says, is increased focus well before a show on ways to get the right people into those spaces. “Companies need to be more sophisticated about pre-show marketing,” Miraglia says. Knowing that the consideration phase for attendees today starts before the show, he says, companies need to work harder in advance to make sure they are on the short list when an attendee walks in the door.

In what Majerowski refers to as a European influence, many exhibits are beginning to incorporate big, comfortable chairs in their design to conjure the image of a relaxed environment. It’s a sharp departure from days in the past when formal-looking exhibits were used to convey the professionalism of a company as a selling point. Today, companies are taking a much softer approach, Majerowski says. “It’s about relationship building, it’s not about the hard sell anymore,” he says. “It might vary some from industry to industry, but it does generally feel like company representatives are trying to get to know people and are doing fewer hard-core product demos.”

Sean Roberts (pictured left), president and CEO of SiLusions Corporation, calls this new trend towards casual seating and coffeehouse-type atmospheres the “Starbucks syndrome,” where exhibitors are trying to create spaces that remind attendees of comfortable places that some may view as their home away from home. Contributing to that vibe is the use of earthy, natural finishes, Roberts says, which appeals to the environmentally conscious nature of the younger generations today.

Miraglia agrees that plush, homey spaces are in vogue, whether literally designed to look like a coffeeshop, a nice home or an upscale office space. In those designs, he says, use of moody lighting offers a more intimate feel, and materials like wood, particularly reused packing crates, do double duty – both creating an informal vibe and making a company look more “green,” which is close to the hearts of many Millennials. 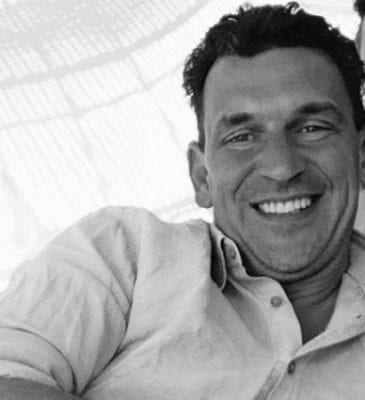 That trend is echoed in European exhibits, says Nick Paton (pictured right), client services director for Pico EU. “Materiality trends continue to be strongly influenced by retail, but there is also a renewed need to be seen as responsible for environmental concerns,” Paton says. Up-cycling and raw finishes done well can make a relatively low-cost exhibit stand out.”

“Sometimes trends are continent-specific,” says ExhibitMatch co-founder Tim Sullivan (pictured left), “because they are influenced by things like drayage, material availability or cultural interests.” Other trends in exhibiting are similar globally, but the inclination toward environmental responsibility isn’t necessarily one of them, he adds. “Environmental concerns do not carry the same weight in Asia, for example, as they do in the United States or Western Europe.” However, Sullivan says, the relatively new lean in the United States towards relationship building and exhibit designs that support that is something European and Latin American markets have been doing for some time.

One trend that is translating fairly universally, Sullivan says, is the concept that show attendees today are looking for companies to do business with that reflect their values and want to understand their needs and pain points. The new generation of show goers don’t just want to buy things, they want to feel a connection to those they do business with. As such, the relationships being built on the front end of a business deal have taken on a magnified importance in a sales arena that used to operate in a generally impersonal way. 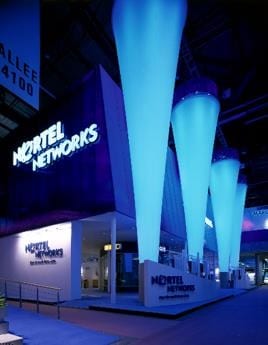 Aside from the added interpersonal emphasis in tradeshows, there are a few technology trends that entered the marketplace in the past handful of years and are hanging on, experts say, though companies feel an increasing pressure to use them for a legitimate brand purpose rather than just for the sake of having them. Virtual reality is one such tool, though Roberts says it is a technology that has not taken off as quickly as trend forecasters once predicted. “I think it will come of age,” he says, “but it’s still bulky and ugly. It has a ways to go.”

Roberts believes that as technology like virtual reality and augmented reality become more sophisticated and affordable, they will become much more prevalent on the show floor than they are today. “We are quickly moving into the ‘Star Wars’ phase,” he says, “with things like holograms changing the way we interact with brands on the show floor. If I had a crystal ball, I would say that events in the future could be all holograms.” Until then, Roberts says, show goers can expect to see increasingly personalized experiences in exhibits, whether through the technology tracking tools available or through the intensified efforts at forging face-to-face relationships with people rather than business deals.

When trying to facilitate that connection through exhibit design, Paton says, time, logistics and cost are the greatest limiters to what a company can achieve. “Good, fast, cheap. You can only choose two,” he jokes. 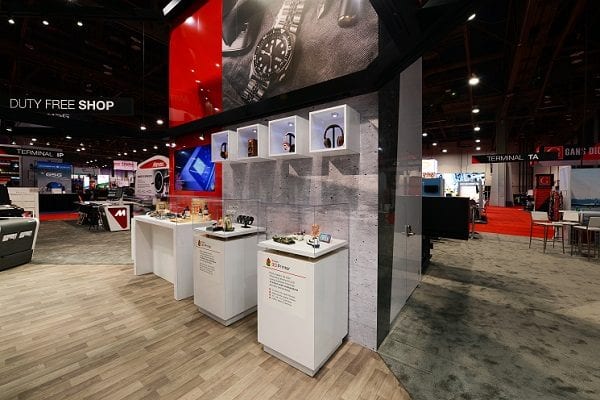 Fortunately, relationship building in an exhibit doesn’t have to cost a lot because the most important exhibit design element to promote that, besides comfortable conversation areas, is the people staffing a space. “Trends are going beyond the physicality of things,” Majerowski says. “Visitors want to feel special and known intimately. It’s so much more about understanding and catering to their needs.”

Indeed – while shiny objects and flashy designs are fun to have in an exhibit, they are no longer the basis on which a good exhibit is judged, Miraglia believes. “It’s not about attracting people to the booth,” he says. “It’s about how I make them feel when they get there.”