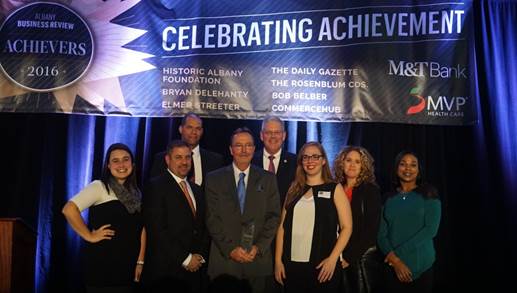 Bob Belber, Regional General Manager for SMG, was honored with the Executive of the Year Award at the Albany Business Review’s 2016 Achievers dinner on November 3, 2016. The award acknowledges a business leader who makes an apparent and profitable contribution to their company.

This year, Belber has also overseen the ramp up in sales and marketing as well as pre-construction consulting services for the Albany Capital Center, Albany’s new convention center set to open in March 2017. The Times Union Center is getting an upgrade to match, with $30 million being put toward renovations that include a new façade and atrium with an indoor garden and three-story waterfall as its centerpiece. With the creation of the Capital Complex which includes the Empire State Plaza, Albany Capital Center, Times Union Center, and The Egg, SMG is widening its focus of the size and type of events Albany and the Capital Region can attract and host.

“Bob is very deserving of this tremendous honor and recognition as he has done an excellent job leading our efforts at the Times Union Center for many years,” said Harry Cann, regional vice president, SMG. “His passion for the industry and Albany County is clearly evident to all.  Furthermore, Bob understands and places the right focus and priority on the diverse needs of our guests and users and leads and directs our staff to meet and exceed their expectations.”

“Any good leader is only as good as his people,” Belber said when delivering a speech to more than 200 business professionals at the awards dinner.

The Albany Business Review Achievers Program recognizes Capital Region business community leaders for their contributions to the growth of the Capital Region. It has been held annually since 1983. There are award opportunities for individuals, companies and organizations. Other categories included Newsmaker, Family Business of the Year, Nonprofit of the Year, Company of the Year, CFO of the Year and CMO of the Year.

About SMG: Founded in 1977, SMG provides management services to more than 230 public assembly facilities including convention and exhibition centers, arenas, stadiums, theatres, performing arts centers, equestrian facilities, science centers and a variety of other venues. With facilities across the globe, SMG manages more than 14.4 million square feet of exhibition space and over 1.75 million sports and entertainment seats. For more information, visit www.smgworld.com.

About Albany Capital Center: Opening in March 2017, the Albany Capital Center, operated by leading venue manager SMG, is a modern, premier event and meeting destination in New York’s culturally rich Capital Region. Connected to the Times Union Center, Empire State Plaza and Renaissance Albany Hotel via enclosed walkways, the convention center will host a diverse array of trade shows, consumer and social events, and meetings for up to 5,000 guests. For more information about the Albany Capital Center visit www.albanycapitalcenter.com.