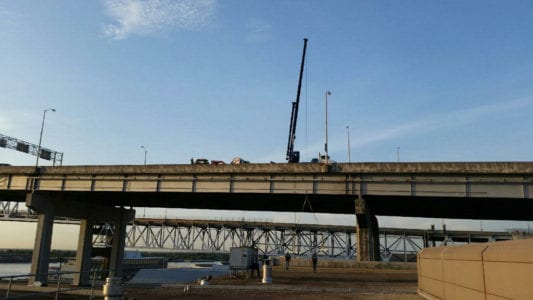 Drivers on the Crescent City Connection bridge, which connects the two banks of the Mississippi River in New Orleans, saw an interesting sight last Saturday morning: a crane parked in the emergency lane of the bridge, lowering a 1,500-lb piece of equipment 30 feet over the side of the bridge, to the roof of the New Orleans Ernest N. Morial Convention Center below. 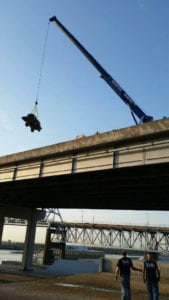 The equipment is the condenser unit for the Convention Center’s new blast chiller, which will complement the other equipment that Centerplate, the Center’s exclusive food service provider, uses to prepare meals for banquets.

This interesting route to its final resting place was calculated to save time, save the cost of renting a special crane that could reach up to the roof, and also to avoid the closing of Convention Center Blvd. Longo Mechanical  completed the lift in one hour, and the work did not affect street traffic or events in the building.

With 1.1 million square feet of contiguous exhibit space, an award winning staff and first class amenities, the New Orleans Ernest N. Morial Convention Center is the sixth largest convention center in the nation, a consistent Top 10 host of the largest number of conventions and tradeshows annually, and one of the city’s “Top Workplaces.” A leading rainmaker of the city’s hospitality industry, MCCNO event activity has produced $50.03 billion in economic impact since its 1985 opening, including $3.12 billion in new tax revenue.