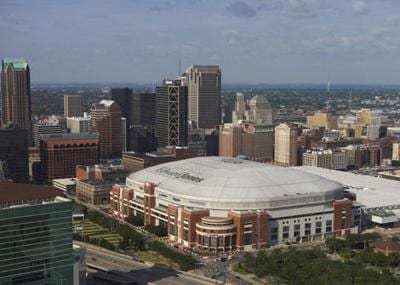 CC Spotlight St. Louis: ACCC is “Gateway to the West”

St. Louis, Missouri, bills itself as the Gateway to the West and the Gateway Arch, the iconic representation of that, is walking distance from America’s Convention Center Complex. The ACCC was built in 1977 as the Cervantes Convention Center (named for former mayor Alfonso Cervantes), and the 502,000 sq.ft. of exhibit space still goes by that name. The center has expanded greatly over the years and now includes The Dome at America’s Center, a 67,000-seat arena that also has two special events spaces that can handle parties and receptions and other less formal gatherings. The North End Club can accommodate 600 and the South End Club, 345 people.

The original cost of the facility was $34 million in 1977. Plans for expansion to remain a competitive convention destination began in 1985 and the Dome was approved in 1989. The next year, actual construction began on the south expansion which was completed in 1993. Construction on the eastward expansion, the Dome was completed in 1995 and was initially called the Trans World Dome, for Trans World Airlines, aka TWA. The St. Louis Rams played their games there that year, although initially they had to share Busch Memorial Stadium with the Cardinals as finishing touches were completed on the dome. The team played there for 20 years before returning to Los Angeles in 2005.

Funds have been approved for the AC Next Gen Project, which is set to transform the layout of the current exhibition hall and add 92,000 sq.ft. of exhibit space, including a 60,000 sq.ft. ballroom and meeting area with 20,000 sq.ft. in pre-function event space, 26 new loading docks and renovation of the existing 12 docks. The timeline for this project is still in flux.

The ACCC has hosted a diverse selection of conventions and events since its first convention, an NAACP convention, was held in 1977. When the southern expansion was completed in 1993, the St. Louis Boat and Sport Show was the first event to use the new exhibit space and combined with the existing halls the total exhibition area was 340,000 sq.ft. The first event to take place after the dome was completed in 1995 was the Primerica Financial Services convention and with 40,000 delegates they were the first group to utilize the entire complex including The Dome at America’s Center.