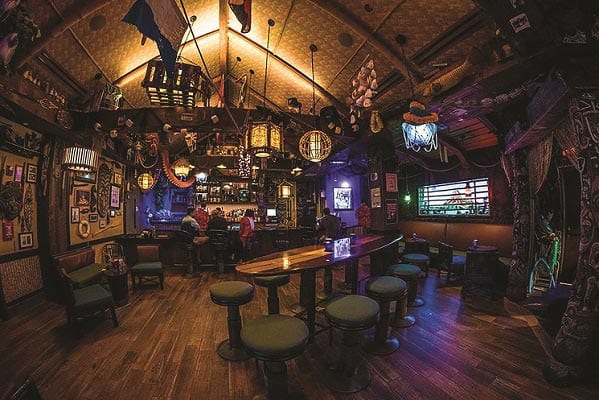 The D.E.A.L. (Entertainment): From the House of Blues to The Ranch, Anaheim Has Entertainment for Grown-up Kids Too!

Anaheim’s attractions may bring out the kid in you but its entertainment offerings will make you glad you’re over 21. Trader Sam’s Enchanted Tiki Bar, a hidden gem inside the Disneyland Hotel, becomes a 21+ oasis at 8 p.m. with Polynesian-style libations that come in vessels ranging from a shrunken zombie head to a miniature rum barrel.

The Fifth, Anaheim’s only rooftop restaurant and bar, serves up craft cocktails in a swanky outdoor lounge. Located above the Grand Legacy at the Park, the bar becomes adults-only after 10 p.m. Anaheim is a craft beer mecca as well, with a rich history dating back to the 1800s. Check out more than a dozen breweries, including Towne Park Brew, Brewheim, and the comic-book-themed Unsung Brewing Co. Or for a mellow night out, Anaheim offers several wine bars including Pali Wine Co. at the MAKE building and Colony Wine Merchant in downtown Anaheim.

But it’s just not entertainment to me unless there’s music playing, and if you can dance to the music, that’s even better. And several places in Anaheim are real stand outs. Brianna Socha, communications specialist at Visit Anaheim, recommends the House of Blues at Anaheim GardenWalk as the go-to place to enjoy world-class live music. The famed venue left Downtown Disney to relocate at the Anaheim GardenWalk and has four separate performance areas, including the exclusive Foundation Room for the ultimate VIP experience. There’s live entertainment every night of the week in the restaurant and bar, plus major headliners performing in the main music hall.

But also not to be missed is The Ranch—which has it all! Located in the heart of Anaheim, the award-winning Ranch has one door for its amazing restaurant (featuring food from their very own local organic heirloom farm), one door for its saloon (voted Best Place for Country Music & Line Dancing in Orange County two years in a row with a 40-foot concert

stage, state-of-the-art sound system and dance lessons twice nightly) and an events center (on the sixth floor above the restaurant and saloon, with six private dining rooms) all under one roof. Guests can learn the two-step, West Coast swing and line dancing from top country dance instructors, sip an exclusive selection of whiskey and local craft brews, and feast on a menu that includes the famous 58 oz. Cowboy Ribeye.

Socha also recommends seeing concerts at the Honda Center, which doubles as a 19,000-seat performance space when the hockey team isn’t playing. Next door is the City National Grove of Anaheim, offering a more intimate experience for as little as 50 or up to 5,000 concertgoers. And don’t forget that Disneyland puts on a fireworks show every night at 9 p.m. that can be seen from nearly everywhere in Anaheim!