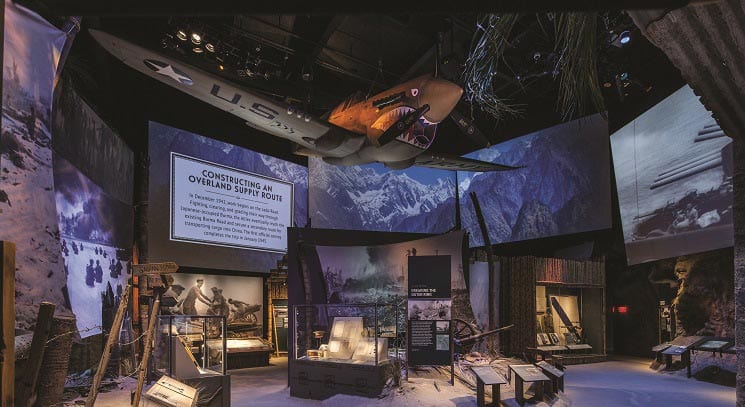 The Mastery of Museum Exhibit Design

When it comes to creating exhibits, one might be tempted to think that the fundamental principles of exhibit design are fairly universal no matter if a display is built for a museum or tradeshow floor. After all, whether headed for Comic-Con, the National Hardware Show or the Smithsonian Institute, elements such as signage, lighting and architecture all need to be expertly crafted with the visitor experience in mind, right? In reality, designers say, displays built for museums and those created for tradeshows have little more in common than the fact that they are both spaces people walk through. Everything else, from the materials used to what the space needs to accomplish, is entirely different.

The contrast between styles of exhibitry begins with goals, says Betty Brennan, president of museum exhibit specialists Taylor Design, Inc. “A tradeshow booth must attract people into the booth and get them to talk to you. Tradeshow booths must convey what you do and how you are different from the competitors,” Brennan says. “Museum exhibits need a central theme—for a visitor to take home inspiration about the subject matter and be more self-directed.” Each style, she says, requires a specific type of prowess. “Museum exhibits require a unique expertise in storytelling and design and you need expertise in interpretation and visitor behavior,” she says. “For tradeshow booths, you must have expertise in marketing, sales and the messaging that attracts clients.”

Greg Matty, a senior associate and studio director for Gallagher & Associates, agrees that there are dramatic differences between the disciplines. “Museums are about storytelling using a collection of images and artifacts to drive that story arc,” he explains. “At the beginning of the process, we start by asking what are the takeaways and what does our client want people to leave feeling and understanding. Then you begin to design around that.” But a tradeshow display positioned somewhere in the din of a convention hall has an entirely different hill to climb. “A tradeshow exhibit needs to attract people visually and sell them on a product,” Matty says. “They may do a little storytelling, but they don’t have the real estate to do that in an elaborate way.”

Where a tradeshow display has just seconds to grab attention from the aisle and send a message during a brief booth visit, a museum has the luxury of time and attention, allowing it to unfold a story like the petals of a flower as visitors explore a space. And while a tradeshow booth will need to be installed and dismantled as easily as possible, a museum display requires the kind of construction that will last a minimum of ten years, sometimes 20, Matty says.

So, given their vast and complex differences, it is not surprising to find little overlap between companies that design for tradeshows and those that specialize in museums. Companies may cross over a little bit, Matty says, but are more likely to specialize in one style or the other. 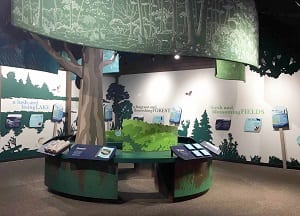 What may come as a shock however, is how many museums there are out there to design for. According to “Museums of the World 2019” by Munich-based publishing house De Gruyter Saur, there are 55,000 museums around the world in more than 200 countries. Just over 35,000 of those are in the U.S., the Institute of Museum and Library Services says. They fall into myriad categories, from art to cultural to historical, but the universal thread between them, Matty says, is that they exist to deliver information for people to think about.

Telling those museum stories has changed over the decades, particularly with the forward march of digital technology, and with 27 years under its belt, Taylor Design has seen those shifting sands of time. “One of the biggest changes over several decades is that exhibits are less static,” says Brennan. “To engage visitors, exhibits need to be dynamic—not our grandparents’ exhibits of stuff put behind glass with long-winded text panels placed in front. Sometimes stuff is still put under glass in order to protect collections and to display the real (authentic) thing to visitors. Yet, the material is much more immersive and interactive in how it is displayed. Plus people are more distracted. You cannot have long-winded text panels or videos and engage a visitor.”

That increase in interactive technology has caused a substantial shift in how funds for a display are spent, Matty says. At the College Football Hall of Fame, for example, half of the budget went to audiovisual components, double what would have been spent on multimedia elements in the past. But what visitors encounter as a result is an astonishingly rich and personalized experience that sets the bar high for interactivity.

At the venue, which Gallagher & Associates helped complete in 2014, visitors get a radio-frequency identification (RFID) card as part of their entrance ticket and are able to use it to enter the names of their favorite teams. Then, as they move through the displays, content is automatically generated about the teams they follow specifically, from fight songs to glory moments. “It allows the museum to shape the experience for the interests of individuals,” Matty says. “You and I might go to the same museum and have completely different experiences.”

That personalization is something that museum goers are especially hungry for, Matty says, and the College Football Hall of Fame is just one of many good examples of RFID technology in action. The chips can also do things such as tell a display to deliver content in a different language, follow the story from a particular historical character’s perspective as a visitor moves through displays and send a message to staff when there is a clog in traffic flow around an exhibit.

While the cost of integrating RFID technology has come down significantly since its introduction, other types of technology can quickly blow a budget and must be used purposefully. “Clients ask me all the time what the next ‘wow factor’ is going to be but I don’t like to start there,” says Matty. “Someone might say, ‘I’d like a hologram,’ and so you shoehorn in a hologram, but people aren’t going to be pulled in just because of that. You need to start with the story—what is the arc of the storytelling—and build it out from there.”

Brennan agrees that a good museum display starts with the story, not the method. “There is a much-needed trend to use an interpretive planning and design process,” she says. “This process not only puts the story first, it also analyzes management needs, resource considerations and visitor desires.” The result, she says, is a more effective museum experience.

Brennan believes there is a risk, however, of over-using technology to the point that it begins to dilute the experience rather than enhance it. “The rise of mixed media will continue,” she says. “On the other hand, people want authentic experiences. This means don’t add too much digital media that replaces presenting the real thing. The purpose of museums is to preserve humanity through collections and education. People want to see the real thing or representation of it in a physical way.”

But what they don’t want, Matty says, is another app on their phones, and progressive museums have stopped trying to coax visitors to download something so their experience can be interactive. The only way to get into a visitor’s digital existence is to offer a carrot so sweet that a selfie-hungry society can’t resist it. “A lot of people don’t want to put something of yours on their phone because it feels intrusive,” Matty says. “But, for example, at the College Football Hall of Fame, if they register their email, then they can take pictures of themselves with digital face-painting in their school’s colors and the museum will send the image ready for Instagram.” By slipping some branding on the image, the museum meets the needs of its visitors and gets a marketing win for itself at the same time. 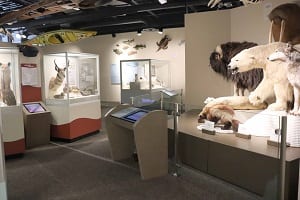 Something else that museums are increasingly doing to meet the desires of visitors is creating more rotating exhibit spaces where displays can be refreshed frequently, perhaps to reflect current topics or host traveling displays, Matty says. Along with experiences that are customizable and stories delivered compellingly, these measures are absolutely necessary to making a museum feel relevant to an audience whose interests and attention span have changed over recent decades.

A good museum exhibit, therefore, must answer the visitor question, “Why should I care about this?” before it is ever asked, Matty believes, because without telling the story in a way that generates relevance, a museum is likely to lose potential visitors to any of the many things it is competing with for their time. “It doesn’t matter what the topic is,” he says. “A well-designed exhibit has to pull people in and help them understand why the story being told just might touch them in some way and why it’s something that they should think about.”