Sheldon Adelson passed away last week on January 11 at 87. Some may know him for his philanthropy, his politics or his rags-to-riches story. His father was a cabdriver, and he was a newsboy in Boston at the age of 12. He was a successful entrepreneur, and became one of the richest billionaires in the U.S. (#19 in Forbes Top 400 Wealthiest Americans of 2020).

But before all that, he and his partners founded COMDEX in the late ‘70s. In 1995, they would sell the Interface Group (which included COMDEX) for $865 million; Adelson’s share was said to be more than $500 million. 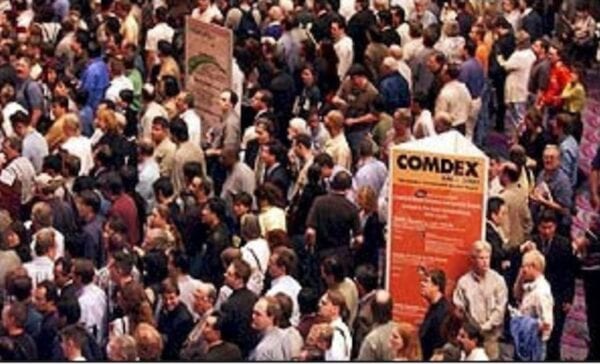 For more than a decade, Fall COMDEX was the largest tradeshow in the U.S. From 1984-2001, it dominated Las Vegas in November. It filled the convention center to its maximum, and spilled displays and people off the main exhibit floor and into hotels and parking lots. At its peak, it attracted 2,337 exhibitors, 225,000 attendees, and displayed more than 10,000 products.

The Computer Dealers Exposition, as it was known in its first year, opened in a ballroom at the MGM Grand in Las Vegas in 1979; it had 167 exhibitors and 3,904 attendees. At the time, the National Computer Conference was the largest computer show in the country; it focused on large main frame computers, and relegated personal computers to the garage level of the Disneyland Hotel. COMDEX’ initial focus was on manufacturers, dealers, retailers and developers. The first two years, the show was only in Las Vegas. Digital Equipment Corporation was one of the major exhibitors during that time. In year three, COMDEX was in New York City in the spring and in Las Vegas in the fall. In 1981, IBM and Apple displayed PCs. (Apple II was first displayed at the West Coast Computer Faire in 1977).

In 1982, COMDEX held three shows: they were in Las Vegas, Amsterdam  and Atlantic City. Microsoft 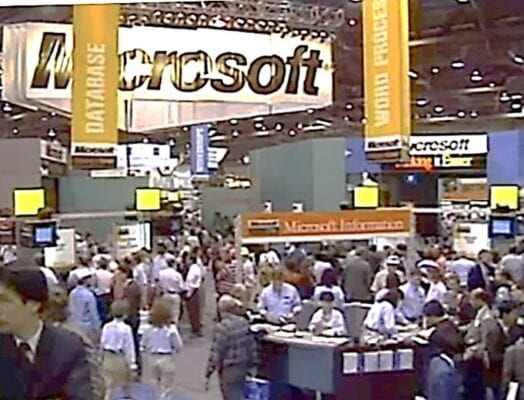 By 1998, COMDEX was so large that, in a single year, there were 22 separate shows held around the world. In total, there were 185 COMDEX shows between 1979 and 2006. The last live COMDEX in the U.S., in 2003, drew only 500 exhibitors and 40,000 attendees. There were six shows in 2004, and a single show in Athens in 2005 and again in 2006. Reasons for the decline differ: some said the show was too horizontal, too public, too over-saturated, or that the new owners were too concerned with revenue. There were three virtual shows, 2010-2012, lasting three days each in mid-November (similar to the previously live Fall COMDEX dates).

COMDEX is a cautionary tale. It filled a missing need, and grew quickly. It increased attendance by opening its doors to the public, and then spread shows around the globe. Prior to its sale to Softbank in 1995, few would have predicted the show’s demise. The show peaked in the late ‘90s, and key companies like Apple and Microsoft stopped exhibiting in 2000. Key 3 Media (a Ziff Davis spinoff) purchased the show in 2001.

Only tradeshows that matter will prevail. It’s not important if the show is large or small, virtual or live. In order for a show to exist and to continue, it must be important to its stakeholders—not only its stockholders, but also its customers, attendees and exhibitors.