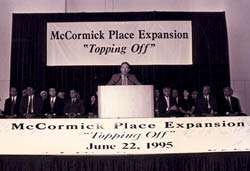 This McCormick Place expansion press conference took place in June of 1995. Senate Bill (SB) 28 is likely to have serious implications on how tradeshow business is done in Chicago in the future.
ECN file photo by Don Svehla

As of press time, the Senate Bill (SB) 28, which was passed by the Illinois General Assembly on May 7, was still making its way to the desk of Gov. Pat Quinn. It has been intense two weeks in Chicago. Juan Ochoa, chief executive officer of the Metropolitan Pier and Exposition Authority (MPEA), resigned his position on May 4, just days before the measure was passed. The bill once signed would appoint Jim Reilly, the legislature’s chief adviser on McCormick Place, as trustee over the MPEA, with extensive decision making powers for an 18-month transition period. His appointment, however, could involve a conflict of interest, considering his position as a former McPier CEO, his close ties to contractors and the reports by the mainstream media that he was paid to recommend the changes, one of which was creating the trustee position.


While the final version of the law is still unclear, it is likely to have serious implications on how the tradeshow business is done in Chicago and possibly in other large tradeshow destinations around the nation. The International Association of Exhibitions and Events (IAEE) issued a “call to action” alert May 17, asking show organizers to contact Quinn and remind him of the urgency to implement the reforms.

“McCormick Place and the exhibitions and events industry in general now have a precious but limited opportunity to bring industry practices into line with the new economic realities of our times,” the alert said. “The changes that would follow enactment of Senate Bill 28 in Chicago might quickly be adapted by other jurisdictions based upon their own competitive interests. It is a development that could, in retrospect, be viewed as an important industry crossroads.”

In the spirit of the new era starting in Chicago, Tim Roby, president and CEO of Chicago Convention and Tourism Bureau, and David Causton, general manager of McCormick Place, went online with a webcast that explained some of the changes.

“We will be with you every step of the way communicating the changes that affect your meetings here in Chicago,” Roby said. The webcast can be found at www.choosechicago.com/videos/chicagogetsitdone.htm.

Some of the most significant provisions introduced in the bill include eliminating exclusive contracts, with organizers and exhibitors being able to contract with pre-approved electrical services providers and bring food from outside vendors. Exhibitors may do their own work on booths of any size, including installation of signage, computers and audio/visual equipment as long as it doesn’t require operating heavy equipment such as forklifts. Some of the proposed changes include applying work rules to every union with jurisdictions determined by MPEA, designating a standard of two persons per crew, designating one steward per union, charging straight time for any eight-hour shift between 6 a.m. and 10 p.m. Monday through Friday.

The audit provision of the bill that requires twice-annual auditing of bills sent to exhibitors still remains controversial. While the idea is to ensure that the savings are passed to exhibitors, the language is vague about the documents that can be requested, and the ambiguity has been evoking a strong tradeshow industry reaction.

“MPEA has their hands tied because they are afraid of offending the very people who potentially are the problem,” said David Mihalik, CEO at ELITeXPO Cargo Systems. “Certainly in the cases of electric or other exclusive services where the costs got out of hand, they were able to identify a specific area that they themselves controlled. I’d be surprised if MPEA wouldn’t see a backlash from show organizers who don’t feel compelled to share with them their financial information.”

Mihalik also is concerned about material handling, another issue that is stirring debate in the tradeshow community in general and in regards to this bill specifically. When asked what suggestions he would make if writing the recommendations, he said, “One way I’d do this [address the material handling problem] is to exclude the docks from any venue rental. As a city running one of the largest venues in the U.S., I would outsource material handling, put it out to bid and choose three winners who would rotate their involvement in each show held at that particular venue. Or I would let them all provide their own package of rates to handle material handling specifically and price this service solely based upon direct cost plus acceptable profit to run their company.”

In a heated discussion on the Exhibit Designers and Producers Association’s (EDPA) LinkedIn board, Gary Parsons, sales and marketing manager at Archex Display Ltd, also said making material handling competitive would accomplish positive results.
“Who picked CWT (cost per weight) anyway? Why not ‘per piece?’” Parsons wrote. “Imagine going out for dinner and ordering dessert. The slice of pie cost $5.99. That’s not bad. You will order it. Imagine if the waitress asked you the following question – The whole pie is $72, how much of it do you want? Your answer? None. Exhibitors are finally figuring out that they are eating a $72 pie and they no longer want a piece.”

Additional questions come for the labor side of the tradeshow community. Tom Larney, VP of National Sales for Source One Events, says that “the bill still doesn’t address the‘dirty secret’ that the high cost and surcharges on freight and furniture do to commissions back to show management and/or zero management bills. Then what’s happened in the past few years, the larger contractors, GES and Freeman, have left the rates the same so the show that isn’t getting commissions has to pay the same price and they blame it on the unions.

Kevin Fett, principal at Chicago-area Evo Exhibits, has high hopes for the bill and the effect it could have on the business. “Exhibitions overseas have similar rules, and have been thriving,” he said. “My belief is that with these exhibitor rights and practices revamped, everyone will win – from on-site teams, to restaurants and hotels, the great city of Chicago and the entire tradeshow industry. This is important, because what happens here in a great venue hub like Chicago will eventually trickle and happen to all other major venues.”