This Thanksgiving week, the people who make tradeshows happen have much to be thankful for as our industry recovers from the last 20 months. The chart below illustrates the power, efficacy, and longevity of tradeshows. Each show listed is one of the largest tradeshows in 2019, based on square footage, and is ranked in order of the year of their first show. These are some of the biggest, and oldest shows of the past century. It is both significant and impressive that there is at least one show from every decade. 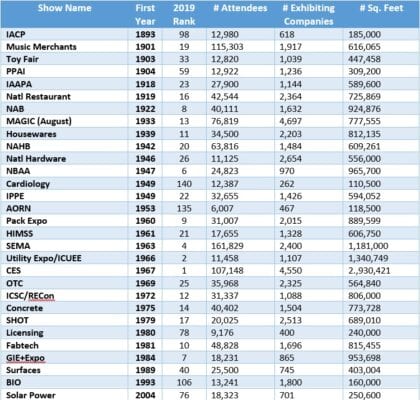 Face-to-face meetings have grown in size and numbers, because they have proven to be the most cost effective form of advertising that exists. They make money for exhibitors, and save time and money for attendees.

The decade with the most shows (in this chart, and based on the year of their first show), is the Sixties. After World War II, there was an increase in economic activity, coupled with the ease and availability of travel due to advances in interstate highways and commercial aviation. McCormick Place opened in 1960; the LVCC opened one year earlier. Both were built in response to the increasing activity of trade-shows. And the construction of these two
centers propelled future tradeshows.

Meetings allow for multiple business opportunities: massive exposure and brand awareness; the ability to view the market and evaluate the competition; the opportunity to meet both clients and prospects; the chance to see, be seen and to network; and the likelihood to close new business.

Tradeshows generate both immediate and deferred sales opportunities, either by writing orders at the show, or with follow-up calls afterwards. Events facilitate personal interaction, networking, education and branding.