Guests started arriving almost a half an hour before the event began to sample the food from nationally known restaurants.
David Fox, Photographer

On July 14, the exhibition industry came out to celebrate the winners of the Trade Show Exhibitors Association’s (TSEA) 2010 Exhibitors’ Choice Awards and raise funds for the TSEA Foundation. The second annual TSEA Foundation Gala was in Boston during the TS2 Show.


Guests started arriving almost a half an hour before the event began, ready to sample the food from such nationally known restaurants as Legal Sea Foods, Morton’s Steakhouse, Grill 23 & Bar, 1st & Fresh Catering, Chocolate 101, and L’Andana.

Artists for Humanity (AFH), the unusual setting for the 2010 Gala, featured works by budding artists on the walls and a cat-walk surrounding the bustling attendees. AFH partners youth with professional artists/designers to design, create and sell art products. In the process, young artists develop entrepreneurial skills and introduce audiences to their voice, vision and virtuosity. The TSEA Foundation proudly partnered with another non-profit for its event.

David Causton, general manager of McCormick Place, kicked off the awards portion of the evening with a presentation reviewing the history of McCormick Place then talked about the changes to the work rules in Chicago. Attendees cheered as they heard about the expanded exhibitor’s rights, allowing customers to do their own work, regardless of booth size. Causton also mentioned that many exhibitors believe the impact of the new legislative changes will make Chicago an even better place for exhibitions and events.

Keith Reznick, co-founder of Creative Training Solutions, hosted the ceremony, sprinkling the awards with videos of how not to accept an award. Reznick, with assistance from Margit Weisgal, president/CEO of TSEA, announced the winners of TSEA awards and the Exhibitors’ Choice Awards, whom TSEA joins in congratulating. 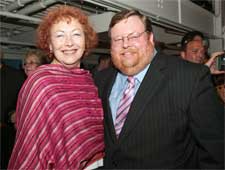 “Karen’s involvement in the success of TSEA is undisputed,” said Weisgal. “Her creative ideas and input contributed greatly to innovative programs as she chaired the Marketing Communications Committee.”

The President’s award went away with Ann Marie Cerise for her insightfulness on how TSEA should extend itself to and for the attendee community.

“Ann Marie Cerise has a background on both the supplier and exhibit manager sides of the industry,” said Weisgal. “She attended TSEA’s first Emerging Leaders program in Nashville where she challenged TSEA to be more than it had been, more that it was, to evolve into an association that truly represented exhibitors and all their needs. Her challenge that day led to us reevaluating our mission. She then became an active member of TSEA and now leads our marketing communications committee. Her strong vision contributes to TSEA’s growth and success in representing its constituencies. We heartily thank her.”

Rick Rinderle was honored with the Chairman’s award for his efforts in modernizing programs.

“Rinderle got involved with TSEA through the CME advisory council,” said Weisgal. “Rick stepped up and took the leadership role in redefining our Certified Manager of Exhibits™ program and brought it into the 21st century. He has made our CME® a valuable addition to the exhibit manager’s arsenal by defining the skill set the CME® designation represents. Yes, he has not done this alone, but his thoughtful governance and guidance kept us on the path to success.”

The award for distinguished service was bestowed upon Arthur Veale, chairman of TSEA’s board of directors.

“We honor with the Distinguished Service Award of 2010, Arthur Veale, CTSM, CME, member extraordinaire, wise leader as TSEA’s Chairman of the Board, and friend in the truest, most expansive definition of the word,” said Weisgal. “He knew his job as well or better than anyone around, and when he took on the chairmanship of TSEA’s board of directors, he guided us through a difficult period with success at the end of the road. We could not have become the association we are today without him. Thank you.”