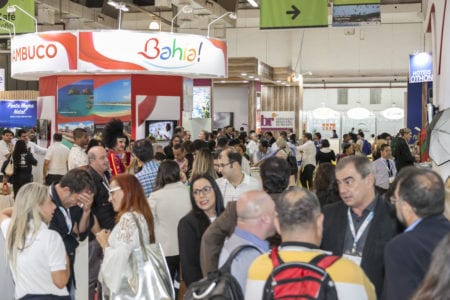 Visitor participation is up 20% and the show is forecast to generate even more business than last year’s $370 million US dollars; WTM Latin America Speed Networking has facilitated a total of 12,000 meetings during the three-day event; WTM Latin America Means Business; at right, World Travel Market Latin America 2017, Sao Paulo, Brazil

The presentation was opened by Cracknell. The executive was pleased with the positive feedback that the show has been receiving from exhibitors since the event got underway.

“It is our feeling that the Brazilian market is heating up again and there is a positive impression in relation to new business,” reported the director. “Our main goal is not just to bring other destinations to Latin America, but also to promote valuable products from here to the rest of the world.”

Among the indicators presented by the executives are the Speed Networking meetings. The number of meetings held during the three-day event should add up to a total of 12,000. In addition, a 7 percent increase was observed in the number of buyers participating in the first two days of the 2017 edition, which proves the mood of economic optimism mentioned by the organization.

“One of the new features of WTM Latin America this year was My Event, an online platform for networking and scheduling meetings, along with other functions, in order to optimise the time in the pavilion and make the visit more focused on business,” says Reinisch.

Lawrence recalled that since 2013 the WTM Latin America team has been holding workshops and road shows in various countries throughout the region, such as Colombia, Uruguay, Argentina, Chile, Peru, Bolivia as well as in Central American countries (Panama, Costa Rica, El Salvador, Honduras and Guatemala), in an effort to increasingly boost the synergy between destinations and strengthen the market strategy both inside Latin America as well as outside.

The director ended his talk reiterating that we are in a constant transformation world, with new tastes, customs and cultural references. “Nowadays the length of time for adaptation is much less than it was 10 years ago, so the challenges not only entail making adjustments, but also anticipating trends.”

Among the event’s highlight moments, the opening ceremony was attended by more than 500 people among authorities, organizers, regional and state secretaries, tourism leaders and businessmen from the industry. In addition, the event was also attended by the Minister of Tourism of Brazil, Marx Beltrão, who highlighted the sector’s importance to generate jobs and strength the economy.

The “Ministerial Round Table on Tourism as a Tool for Development,” also attended by Beltrão, along with Lilian Kechichián, Uruguay’s minister of tourism, and Alejandro Lastra, Argentina’s secretary of tourism, had more than 100 attendees who accompanied the conversation between the three countries’ leaderships covering issues such as visa facilitation policies, the strengthening of air infrastructure, with more connectivity, and promotion of the destination.

In its fifth year, WTM Latin America attracts 9,000 of the top executives from Latin America’s travel industry. In 2016 the event generated more than US$ 370 million in business.

World Travel Market Latin America now in its fifth edition, attracts about 9,000 unique senior executives. The event generates US$ 370 million of new business. Taking place in Sao Paulo Brazil, this show attracts a global audience to meet and shape the direction of the travel industry. More than 5,900 unique visitors attend the event to network, negotiate and discover the latest industry news. http://latinamerica.wtm.com/.