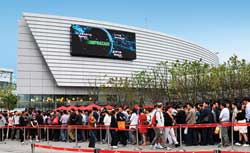 Lines of attendees formed outside of the U.S. Pavilion prior to its opening at World Expo 2010.

An impressive fireworks display above thousands of awed spectators kicked off the 2010 World Expo in Shanghai, China on May 1. The theme of the sixth-month long show is “Better City, Better Life,” and the world nations showcase their take on sustainable development, along with their cultures and achievements, in some 200 pavilions sprawled on 3.5 million square meters.


The organizers claim that it is the largest show in the history of world expos and also expect to set an attendance record with 70 million visitors.

World expos traditionally have served as a vehicle to position the host country as an important economic power in the global marketplace. This expo is no exception. The Chinese government says it has spent more than $4 billion on the World Expo – double what it spent on the Beijing Olympics. A good portion of this money went towards improving the city’s infrastructure and new construction, including the new subway lines that connect the expo site to the rest of the city and the airport.

From the mermaid, the symbol of Norway’s Oslo, to the lock of van Gogh’s hair at the Netherlands’ pavilion, to the tropical forests of Brunei, most countries also stepped up to the plate. The architecture and design elements used in the installations could be the new world in show design and find applications in future tradeshow exhibit design and museum environments around the world. The U.K.’s Seed Cathedral, for example, features about 60,000 lit acrylic rods containing a variety of seeds from different plants. On a giant screen on the façade of the Argentine pavilion, visitors can show off their best soccer passes and tango moves. And of course there is the Swiss pavilion, for example, features a map of Switzerland with a ski lift carrying visitors across the Alps. 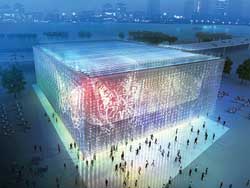 One of the most striking pavilions is The Dream Cube, representing Shanghai Corporate Community, was designed by New York-based ESI Design in collaboration with Chinese architectural firm Atelier FCIZ Architects. Inspired the city of Shanghai and its citizens, it is a 40,000-square-foot immersive multimedia experience, with beds of glowing LED crystalline reeds changing color with the sweep of visitors’ hands, a 360-degree interactive theater where audience’s gestures and actions trigger changes in the environment around them and even the color of the building’s façade, built of used CD cases.

“I like to design something where the story is composed by the people participating in it,” Edwin Schlossberg, ESI’s principal, told Fast Company magazine. “It’s a sign of where we’re going, and we’re just beginning that odyssey now.”

The U.S. pavilion opened to mixed reviews. Plagued by fundraising problems, it was the last to join the expo and has set an example of incorporating sponsorships into every little element. Inside a structure that has been compared to a large car dealership, visitors get to experience a four-dimensional movie presentation exploring ties between the United States and China.

“We faced the initial challenge of putting 60 of the world’s biggest brands under one roof,” said content creator Greg Lombardo from Burbank, Calif.-based BRC Imagination Arts, which created the pavilion shows. “This is actually much of a soft branding exercise. I think that’s actually the remarkable story.”

Members of the global tradeshow and events community will also get a chance to experience the expo during upcoming IFES meeting that will be held in Shanghai June 21-26. The Shanghai 2010 World Expo continues through the end of October.